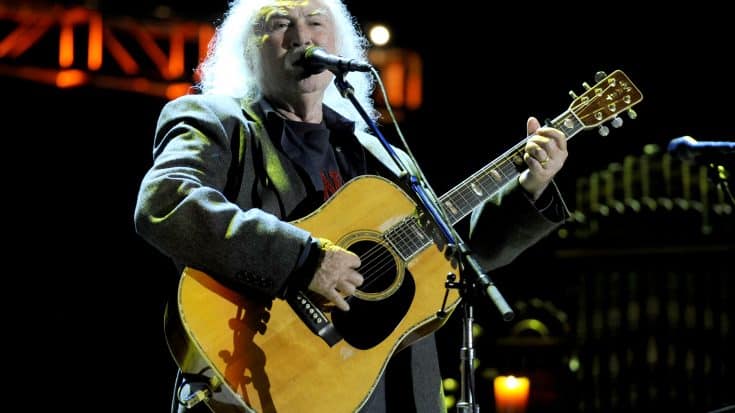 David Crosby previously shared in an interview regarding his issues with his ability to play guitar and why he is likely “done touring.”

He first discussed his upcoming album. When the interviewer told him, “I know you’ve wanted to put this album out for a while, so you must be pretty happy.” He responded:

“You know, in your lifetime, man, you could try a lot of times to put a group of people together in a room and make music. Every once in a while, it will be magical. That’s when there’s a chemistry going on in there. This one was definitely one of those. It was like the last night of a tour and we had done really well. We’d polished ourselves up to where we were very confident and very happy. You can hear it in our voices. We’re just extremely joyful and really into it. It’s rare that you get that kind of thing recorded, but we did and we’re lucky.”

When asked a follow-up question, “You’re often finishing another album when we speak. So considering that these performances go back a few years, are you able to maintain a connection with them? Artists sometimes move on.” Crossby said:

“I’m] very, very connected because it’s good and I’m proud of it.

“It shows you what the chemistry was that made me fall in love with those guys in that band. You’re right, we do move on. I have another Lighthouse band studio record finished, mixed, and mastered. It’s ready to release already. And I’m two songs into another Sky Trails band record with my son, James [Raymond]. I’m three songs into another Lighthouse record after this one, but I have an entire one that you haven’t heard.”

Since these materials are still unheard of at this time, the singer said that each piece of music was made differently to give his fans a hint of what to expect. Afterward, he answered the question of whether it was true that he is done touring. Crosby explained:

“Yeah, I think so. I can’t guarantee that. It’s possible that I could teach my guitar parts to somebody else. I can’t play well enough anymore. I’ve got tendonitis in both hands. I can’t play well enough for my standards on stage. I could probably get away with it and you’d probably like it, but it’s not good enough for me. It’s possible I might do a residency some place. We’ll see.”