Dave Grohl Let Axl Rose Borrow His Throne, But Didn’t Realize This Embarrassing Fact Until It Was Too Late 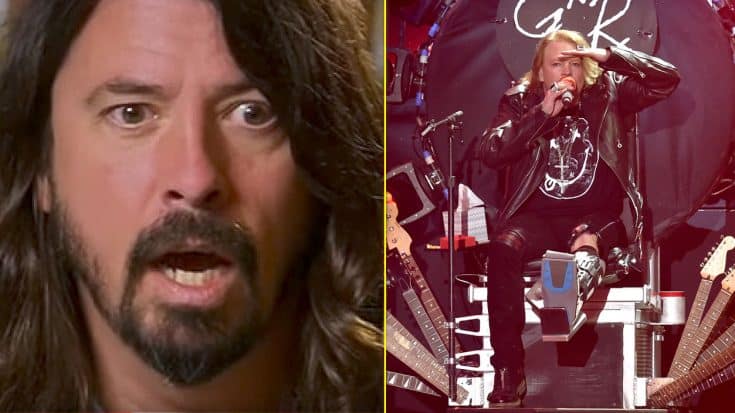 When Guns N’ Roses frontman Axl Rose was sidelined by a broken foot just before the start of the band’s highly anticipated Not In This Lifetime…Tour, it looked for a moment very much like the tour was doomed before it even began. How could Axl perform with a broken foot and better yet, would he perform with a broken foot? Thanks to Foo Fighters frontman and all around good guy Dave Grohl, the answer to both questions proved to be a resounding ‘YES!’ as he, freshly healed from his own broken leg, loaned Axl the guitar throne he’d had built for the duration of the Foo Fighters’ 2015 summer tour.

An intimidating structure that looks an awful lot like the Iron Throne from Game of Thrones but constructed with guitars and lights, the throne looks pretty damn cool – to everyone but Dave, who during an interview with Rolling Stone revealed that looking back it may not have been the most…reasonable idea he’s ever had:

“I lent the throne to Axl Rose because he broke his foot awhile back, and I went to the show to see them.

It was the first time I’d been in the audience, watching someone perform in this thing, and I thought, ‘That is the most ridiculous f—— idea.,'”  groaned Grohl.

If it’s any consolation, fans who turned out to see a rock solid Guns N’ Roses reunion show loved it. So did Axl, who took to Twitter to publicly thank Grohl for his kind contribution:

HUGE THANK YOU to Dave Grohl for the use of his rock Throne! An amazing gesture!Words rn’t enough!! Makes all the difference up there!??????