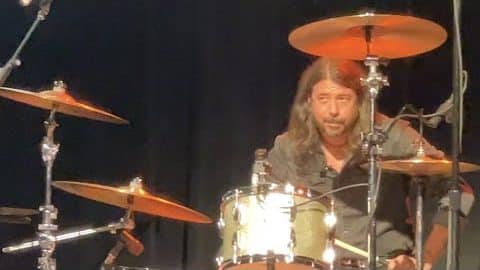 The Lawsuit Was Filed In September

Back in August, Spencer Elden sued Nirvana alleging that his naked baby photo on the cover of 1991’s “Nevermind” was “commercial child sexual exploitation” and an example of child pornography. He also claimed to have suffered “injuries” and “lifelong damages” as a result. Plus, should the LP get any reissues in the future, Elden wanted the artwork changed.

“If there is a 30th anniversary re-release, he wants for the entire world not to see his genitals,” Elden’s lawyer Maggie Mabie told The Associated Press.

In a new interview on Vulture, Dave Grohl addressed the lawsuit.

“I don’t know that I can speak on it because I haven’t spent too much time thinking about it,” he said. “I feel the same way most people do in that I have to disagree. That’s all I’ll say.”

When asked about Elden recreating the photo several times as an adult, Grohl responded: “Listen, he’s got a ‘Nevermind’ tattoo. I don’t.”

Meanwhile, Nirvana announced in September that a 30th anniversary reissue for “Nevermind” is slated for release on November 12. “Nevermind” was originally released on September 24, 1991. The super deluxe edition features four complete live shows – Live in Amsterdam, Netherlands filmed on November 25, 1991, Live in Del Mar, California recorded on December 28, 1991, Live in Melbourne, Australia recorded on February 1, 1992, and Live in Tokyo, Japan recorded on February 19, 1992.