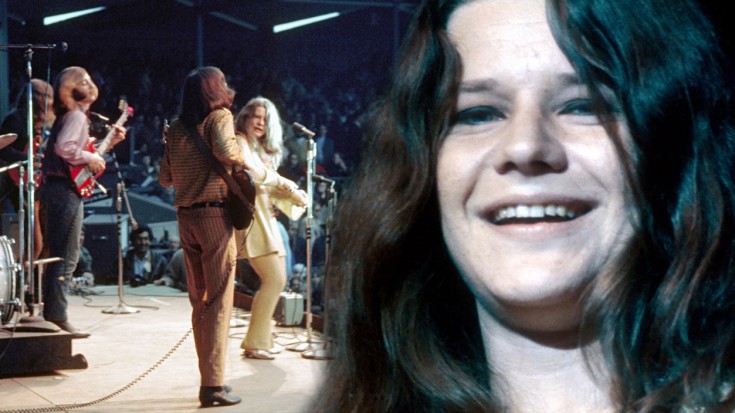 It’s a testament to Janis Joplin’s phenomenal musical ability that it took only two songs for the world at large to sit up and take notice of the tiny woman from Port Arthur, Texas when she appeared at the Monterey Pop Festival. ‘Combination Of The Two’ was one of the two songs she performed with Big Brother and the Holding Company that day in 1967, but by the end of it word spread quickly about this Joplin character with the voice big enough to stun Mama Cass into silence.

Easily one of our favorite performances, it’s the best glimpse into the magic that Janis created when she stepped onto a stage; sure, vocalist Peter Albin has a fantastic voice, but it’s Janis and her magnetic stage presence that reeled in the crowd from the moment she opened her mouth and unleashed that spectacular wail!

Columbia Records signed Big Brother and The Holding Company on the basis of their performance at Monterey.

At only 24, Janis Joplin became a household name literally overnight after Big Brother’s powerhouse performance at Monterey. ‘Combination Of The Two’ isn’t necessarily one of the bigger hits that she’s known for, but the fact that it’s the one that acted as a springboard for her rise to fame and massive legacy says more about Janis’ ability to make the ordinary absolutely extraordinary.

+ Combination Of The Two lyrics +

Everybody’s dying,
They’re all trying to feel it, I know they are.
Everybody’s dancing, they’re singing romance
And they want to feel more, it’s sure ’nuff.

Yeah, we’re gonna knock ya, rock ya,
Gonna sing at ya now. huh!

Yeah, we’re gonna knock ya, rock ya,
Gonna sing at ya now.

Whew whew yeah, yeah yeah,
Alright!
Don’t matter who you are, no, no
Don’t matter where you come from,
Don’t matter if it’s, chicago new york city, san francisco, hawaii or alaska,
I don’t care, no. you just gotta try to feel it.

Yeah, we’re gonna knock ya, rock ya,
Gonna sing at ya now.

Right now we’re gonna do … we wanna do a song right now, I hope no one hangs around, one more little song, it’s all we gonna do, this is called “the farewell song” written by sam.
Get over there, man. alright. ok. hey, uh, I think the iron butterfly’s on next, then the loading zone again, then we’ll be back – we’re not gonna go on next ? ok, well, forget it, er, the rolli
Ones goin’ on next, and then us ? is that it ? ok, well you gotta stay and see that chick, man, she’s out of sight. and you gotta stay and see us, too, so… please stay. last song … thank you