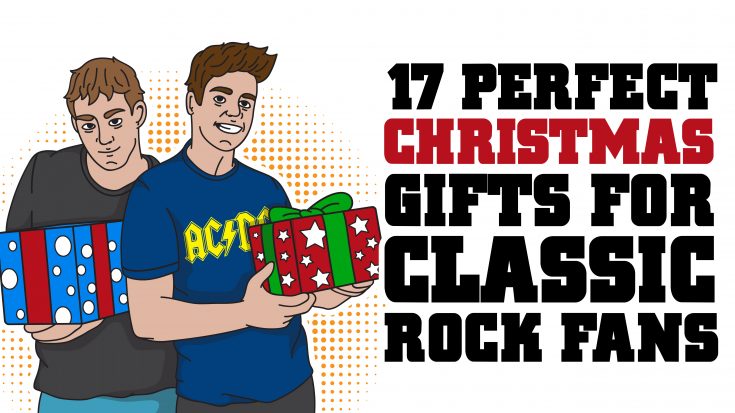 It’s the most rock n’ roll time of the year!

It’s that time of the year again to think hard and long about what to give friends or family who are ultimate fans of classic rock. Seems like giving repackaged records or minted posters of their favorite bands is already getting too common. Of course, we want them to have the widest grin when they unwrap their gift and discover that you got them something pretty cool and rock n’ roll. The holiday season is the perfect time to think and shop creatively, always with best things a fan of classic rock would love in mind.

4. Keith Richards’ Children’s Book  ‘Gus & Me’Perfect for the coolest grandparents to read to their grandkids, Rolling Stones veteran guitarist Keith Richards, who is a grandfather himself to five, has authored a children’s book titled “Gus & Me”. It may be quite paradoxical to have “Keith Richards” and “children’s book” joined in one sentence, but as absurd as it may seem, Richards shows his gentle paternal side as he tells the story of his introduction to music by his own grandfather, Theodore Augusts Dupree, who had played in a jazz big band. It highlights the relationship between grandparent and grandchild, as Richards says of the central focus of his book“I have just become a grandfather for the fifth time, so I know what I’m talking about. The bond, the special bond, between kids and grandparents is unique and should be treasured. This is a story of one of those magical moments. May I be as great a grandfather as Gus was to me.”

Speaking of being a grandparent, this statement shirt is perfect for those who already reached the prime age but is still as cool as they were in the 70s and 80s, being a rock n’ roll fan and a lover of the good kind of music. What a way to show to the world that although age has been catching up, it’s no matter because you were young and hip and very much alive when you experienced the greatest era of music there is.

What better way to bring cheer to the holidays than to taste the greatest Rock ‘n’ Roll Band in the world, literally! The Rolling Stones joined forces with Crystal head Vodka in creating an awesome gift package for Stones fans that proudly shows off Crystal bottle decanter top—engraved with The Rolling Stones iconic lip-and-tongue logo that contains Canadian vodka. It is the official vodka of The Rolling Stones 50th Anniversary. It’s highly collectible, it’s classy alcohol, and it’s The Rolling Stones! It is surely the perfect Christmas gift for any rock fan.

Is the Rolling Stones vodka a bit too refined for your buddies’ tastes? Maybe the good ol’ brewskies is more your pals’ type of drink. Check out this totally wicked Iron Maiden Trooper beer! The Robinsons Brewery released a line of limited edition gift tube of Iron Maiden’s Trooper ale. It’s also one sought out brand having sold an average of 1,300 bottles per day said reports from the last few years. The gift pack includes 500ml bottle of Trooper ale along with a branded Trooper pint glass, and an Iron Maiden logo tshirt. Now that’s something you’d love to have on your Christmas wish list.

Speaking of booze, this awesome rock n’ roll themed beer stein is perfect to put the cool rock band-branded beer in. Mugs are quite a common item to give as gifts to people during the holidays, because really, who can go wrong with a good mug? Why not put a rockin’ twist to that traditional cup that classic rock lovers will surely be grateful to receive? It maybe down the typical gifts route but with this look on the product, it looks like it will be more useful than most common holiday presents. And it’s definitely more affordable as well.

9. AC/DC Wine Collection AC/DC teamed up with aussie winery Warburn Estate to launch their own range of the alcohol drink.

Alright, back to “refined tastes” if you might. AC/DC fans would surely bang their heads over this gift item. Together with Australian winemaker Warburn Estate, AC/DC launched their own range of wines named after their biggest hits. The gift pack includes Highway to Hell cabernet sauvignon, Hells Bells sauvignon blanc and You Shook Me All Night Long muscat. Imagine a wine night drinking You Shook Me All Night Long! That would surely be an interesting holiday season.

The best rock n’ roll Christmas present for the entire family! The Metallica Collector’s Edition Monopoly board game is a real deal-making Monopoly game only made better by being, well, Metallicalized! Surely rock fans would love this collector’s edition board game and it’s also a great way to introduce the greatness of Metallica to the whole fam bam. Who knows, by the end of the game, everybody would be banging their heads to “Enter Sandman”.

KISS has many fan merchandise that can be the joy of any rock fan. This “Merry Kissmas” holiday hoodie is the most appropriate gift to give for the holidays as it makes up for that trendy ugly sweater. There’s just something so rock n’ roll about sporting something that features the KISS band members riding a sleigh over the sky on your chest. It’s surely something anyone in the family would wear. It’s the greatest Christmas pun written on winter clothing.

There was a time when receiving socks for Christmas was such a boring thing to get. Now, it’s quite the opposite, especially that the trend of cool printed socks has been going around recently. And truly, there’s no pair of socks cooler than those from the official Aerosmith merchandise. Not only do your feet get warm during the cold winter nights, they also look super rad. Socks are a practical, inexpensive, fun, and traditional present to give, and surely the receiver will be happy to get the coolest pair there is.

Surely that salty Christmas eve ham would get one craving water come Christmas morn. It’s during those times this awesome Christmas gift comes in handy. This Ozzy Osbourne stainless steel water bottle is not only a practical present to give but also a satisfying thing to own for any rock fan. Also going into the new year, comes everyone’s new year’s resolution to go to the gym. Sporting this unique water bottle to the gym would be an awesome motivation.

Why decorate your Christmas tree with the same old ornaments when you can spice it up with Bon Jovi-themed Christmas balls. It comes in a pack of nine, enough to decorate a miniature Christmas tree. Any classic rock fan would surely love to display these on their tree during the holidays, along with playing Bon Jovi’s “A Very Special Christmas” in the background. Now that’s a rockin’ holiday.

You know the holiday season has come when you’ve felt that slight chill in the air. That’s when the winter clothing comes out of the closet, and nights by the fire while drinking hot cocoa will become a habit. A stylish way to get warm is to tie a scarf around your neck. A rockin’ way to get warm is to tie a Pink Floyd scarf around your neck. Pink Floyd fans will definitely be proud to don this Christmas scarf in the winter weather.

Another cool way to get warm is to wear this official Lynyrd Skynyrd beanie. It’s a style that is timeless and suits any age. From a teenage nephew to a rock fan grandpa, they’d sure be happy to get this rock n’ roll fashion accessory for Christmas. With the Lynyrd Skynyrd logo loudly displayed, they’d be wearing this with pride. It’s a go-to accessory when the weather gets chilly as it’s not only easy to put on, it’s also an immediate rock star look.

The holiday season also represents starting anew for the new year. Calendars are a great practical gift for friends, family, and colleagues. It helps for organizing and scheduling dates of important events and of course, keeping track of the year. The best calendar to give a classic rock fan is this Jimi Hendrix poster calendar that features how great Hendrix was every single month you flip it. This gift is highly useful and effective, an essential item to own, and of course with Jimi Hendrix displayed on it, it makes for an awesome wall display as well.