Caught On Camera: Carlos Santana Jams With Prince, And It’s Almost Too Awesome To Handle 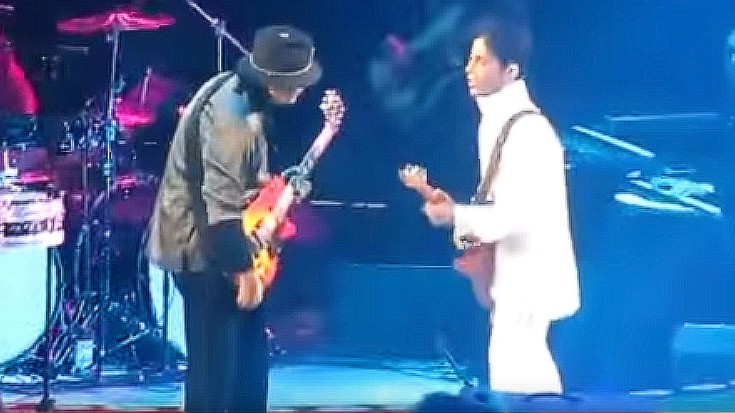 5 years before his death, music visionary Prince performed to a sold out crowd at Oakland’s Oracle Arena, highlighted by a setlist that included “Uptown,” “Raspberry Beret,” and “Kiss,” a 15,000 strong singalong of “Purple Rain,” costume changes galore and an encore done completely with the lights on. As with any Prince show, the night wouldn’t have been complete without a few major twists and turns to keep fans on their toes, and it was the appearance of special guest and rock legend Carlos Santana that really kicked the night into overdrive! Just a few songs into the show, Prince disappeared to give drummer Sheila E. room to shine – only to emerge just a few minutes later with Santana and trade guitars, allowing for the then-63 year old rock legend to unleash a 3 minute guitar solo that was equal parts Latin rock and funk and got the entire crowd on its feet!

As strange as it may seem to watch Prince let someone else shine on his stage, it’s not strange at all; while The Purple One was notoriously proud of his talent and wanted to make the most of his time with his fans, he loved taking time out of shows to give credit where credit was due, especially if the artist in question was able to keep up with his limitless energy and massive stage presence. Great musicians and even greater friends, this footage of Santana jamming with Prince is a fantastic blast from the past and a fun glimpse into the part of Prince who adored his friends and musical influences – be sure to check it out!