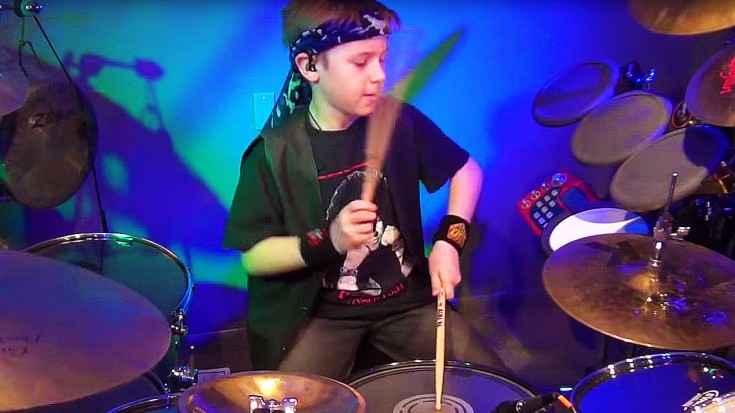 Is It Just Us, Or Is There A Little Eric Carr In There Too?

Featured on glam rock band KISS’ tenth studio album Creatures of the Night, 1982’s “War Machine” gets a new lease on life when 9-year-old YouTube drumming sensation Avery Molek gets behind his drum kit for yet another killer performance! It’s no secret that Avery’s favorite band is KISS – look, he’s even sporting a KISS t-shirt and matching guitar pick necklace – but it’s always a treat to see this junior member of the KISS Army jamming to what he loves most. Though he’s covered several of the KISS songs that have kept us jamming right along for decades, this has got to be one of our favorites!

While he stays true to the original, never straying too far from what former KISS drummer Eric Carr laid out on “War Machine,” you can tell that Avery’s beginning to develop his own style as a drummer, blending what he’s learned so far with something the world hasn’t quite seen before from the young YouTube sensation.

Fun Fact: Creatures of the Night is the band’s last album recorded with Ace Frehley credited as an official member (until 1998’s Psycho Circus).

The best part, however, comes at the end; after delivering a fantastic cover of one of our favorite KISS songs, Avery launches into an Eric Carr-inspired drum solo that makes us believe that this talented young man is going places – and he’s going there quickly. Rock and roll may have had a devastating month in which it lost some of its greats, but if this is what the next generation of rock and roll pioneers looks like, we can definitely rest easy tonight.