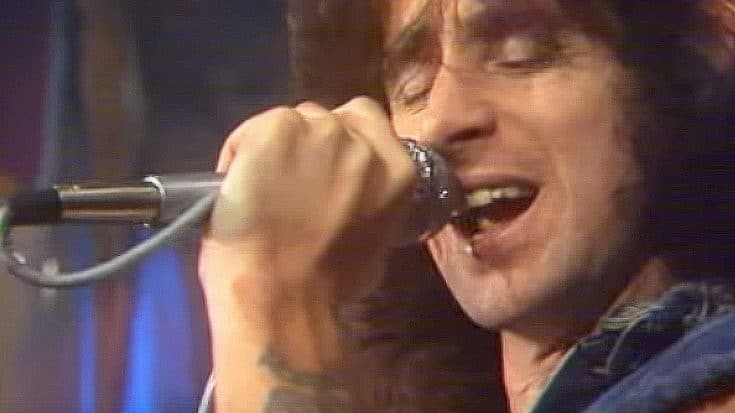 One of those songs made for bombing down the freeway with the windows down and singing at the top of your lungs, AC/DC’s “Highway to Hell” was never more electrifying than when late frontman Bon Scott was at the helm.

Equal parts brutal force and indescribable charisma and charm, Scott had a way of commanding a stage that transformed “Highway to Hell” into a real barnburner of a tune, capable of getting even the shyest of wallflowers on their feet and dancing along in the crush of people clamoring around Bon’s feet. It’s no wonder, then, that AC/DC’s 1979 performance on famed German television show Rock Pop goes down as one of the finest examples of the incredible sorcery Bon Scott was capable of when it came time for “Highway to Hell” to take centerstage.

Fun Fact: In 2009, “Highway to Hell” won the ‘Most Played Australian Work Overseas’ category at the APRA Awards.

Seen here performing with AC/DC just 6 months before his February 19, 1980 death at just 33, Bon is a force to be reckoned with.

Grinning impishly at the cameras, dancing in and out of the brothers Young’s orbit and holding the crowd captive with his textbook brand of showmanship, Bon Scott was both heartthrob and vocal powerhouse, making it implicitly clear why the rock world graciously bowed and still bows at the feet of the man Classic Rock magazine crowned number one in a list of the “100 Greatest Frontmen Of All Time” ahead of Freddie Mercury and Robert Plant.

After a performance like this, we don’t mind doing a little bowing ourselves; join us by checking out the video just below this article!