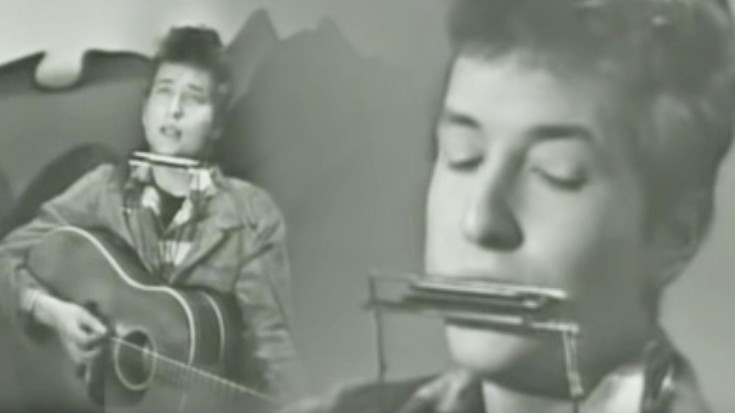 Originally blind fiddler Dick Burnett’s tune, Bob Dylan performs “Man Of Constant Sorrow” on his first ever TV performance in 1963. “Farewell Song,” as it was first titled, was written in 1913 and was largely popularized by Dylan in the 60’s after the Stanley Brothers in the 50’s.

Interesting Fact: Dylan performed a different version of the song that is a new adaptation of Stanleys’ lyrics in his 1988 Never Ending Tour.

Recorded in 1961 by Dylan, “Man Of Constant Sorrow” is a soft ballad about Dick’s personal story relating to his blindness and the struggles he had overcome throughout the difficult 6 years. The line “It’s fare-thee-well my old true lover, I never expect to see you again” particularly paints the vivid imagery of the pain and agony the song writer experienced at the time, even though Dylan performs an altered version in this particular set.

As we gaze upon a young Bob Dylan adopting the folk song as his own, we are instantly reminded of the joy he has been bringing us since that time and so grateful for the music he has brought into our lives. Enjoy this extremely rare footage of one of the greatest classic rock musicians and lyricists of all time.

I’m a man of constant sorrow
I’ve seen trouble all my days
I’ll say, goodbye to Colorado
Where I was born and partly raised
Your mother says, I’m a stranger
My face you’ll never see, no more
But there’s one promise, darlin’
I’ll see you on Gods golden shore
Through this open world I’m bound to ramble
Through ice and snows, sleet and rain
I’m bound to ride that mornin’ railroad
Perhaps I’ll die on that train
I’m goin’ back to Colorado
The place that I’ve started from
If I’d knowed how bad you’d treat me
Honey, I never would have come
Previous
Share on Facebook
Share on Pinterest
Next
Share on Facebook
Share on Twitter
Share on Pinterest