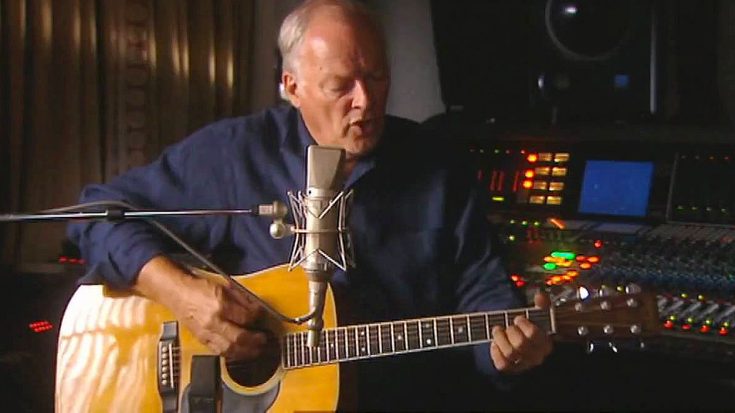 It’s no secret that Pink Floyd’s 1973 epic Dark Side of the Moon is one of the greatest rock albums ever written.

A sonic landscape that found band members David Gilmour, Roger Waters, Nick Mason and Richard Wright plumbing the depths of their artistic abilities to fearlessly explore the topics of conflict, greed, the passage of time, and mental illness, Dark Side of the Moon is an album that when stripped down to its bare bones still remains an absolute wonder to behold – so it’s not much of a surprise that David Gilmour’s choice to go unplugged for one of the album’s key tracks yielded a gorgeous, fresh take on a song we’d already long since fallen in love with.

Fun Fact: With an estimated 45 million copies sold, Dark Side of the Moon is Pink Floyd’s most commercially successful album and one of the best-selling worldwide.

The second track off of Dark Side of the Moon, “Breathe” gets an acoustic update from Gilmour and thanks to the audio located just below this article, we finally get to hear it all; Gilmour’s complex chord progressions, the little nuances that give it its atmospheric qualities – we even get to fully concentrate on “Breathe” as a living, breathing story as opposed to solely appreciating it as a song.

Any musician can transpose their own work into an acoustic piece, but it takes an artist to reinvent it and find new and exciting ways to bring their work to you in a way that’s every bit as exciting the second time around as it was the first, and Gilmour succeeds in spades.