Believe It Or Not, This Simple Photo Of Tony Iommi’s Hand Is Giving Fans Hope 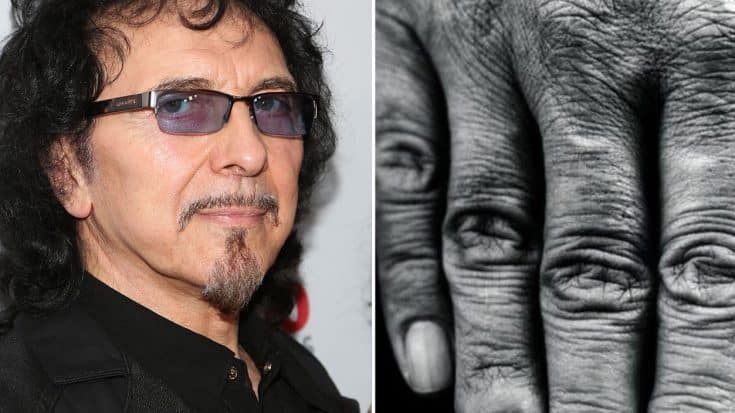 In an era where pop stars cancel tours over a case of the sniffles, Tony Iommi is a rare breed. The Black Sabbath guitarist is an expert on what it is to feel the pain and fear and go after his dreams anyway, having suffered an injury as a youth that by all rights should have ended his career before it even began.

Iommi, 70, was a teenager working in a sheet metal factory when a freak accident resulted in the loss of two of his fingertips.

He told the story in gory detail to LoudWire’s Ryan J. Downey, saying:

“One day, the person that would be sending me the thing to weld never turned up, so they put me on this giant, huge press — a guillotine-type press. I don’t know what happened, I must have pushed my hand in. Bang! It came down. It just took the ends off [my fingers]. I actually pulled them off. As I pulled my hang back, it sort of pulled them off. It was left with two stalks, the bone was sticking out the top of the finger.”

The physical toll of the accident was one thing; the emotional toll was another beast entirely.

“I went to the hospital and they cut the bones off and then they said, ‘You might as well forget playing.’ God, I was just so upset. I wouldn’t accept that there wasn’t some way around it, that I couldn’t be able to play.”

Difficult as it was, Iommi’s injury didn’t rob him of his career. If anything it made him more determined, fashioning homemade thimbles out of a plastic dish detergent bottle and studying Django Reinhardt’s technique as he struggled to find his voice as a guitar player against odds that would have crushed anyone else.

Black Sabbath posted a photo of Iommi’s famed “Hand of Doom,” expecting to only hear cheers from fans who love his guitar work in songs like “Paranoid” and “Iron Man”. Surprisingly, this moment of vulnerability did something even better: it gave hope to fans, some of whom even have injuries just like Tony’s.

The hand of riff and what didn't kill it only made it stronger ?

No way,i have the same☺ pic.twitter.com/tZ7RvGFZ57

And then there was this fan, who recognized that sometimes even the most traumatic of experiences have a way of becoming some of the greatest blessings you’ll ever receive:

That being said, go and do great things! If Tony Iommi had listened to the doctors who said he’d never play again, there’s no telling what would have become of one of rock’s most important figures. Hell – there’s no telling what would have happened to rock music without that hard-headedness that pushed Tony to overcome his injury and make his dreams happen.