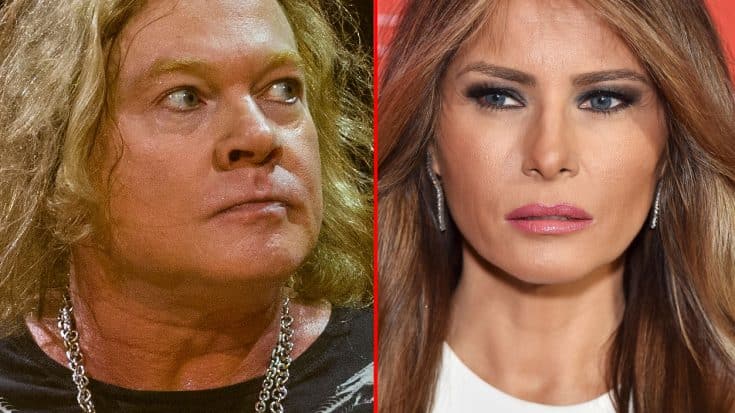 Axl Rose doesn’t hop onto Twitter very often, but when he does you can always count on it to be incendiary.

The Guns N’ Roses frontman took to social media late last week, finding a new target in First Lady Melania Trump after news of her Einstein visa spread, calling her citizenship into question and lobbing insults her way through a series of angry Twitter rants.

"Mrs. Trump was more than amply qualified and solidly eligible," Michael Wildes, an attorney for Melania Trump and her family said to the Post. "There is no reason to adjudicate her petition publicly when her privacy is so important to her." No one else has any!

Rose, 56, has long been a vocal opponent of the Trump Administration, taking aim at the president himself as well as those around him.

Just last week, daughter Ivanka came under attack as Rose called her presence in the White House “inappropriate” – but his recent attacks on the First Lady may have found the singer going just a touch too far, referring to Melania as an “alleged former hooker” and calling her U.S. citizenship an “immigration con” as he blasted attorney Michael Wildes for stressing that her immigration status is a private matter.

Some alleged former hooker who got in on some "trumped up" immigration con somehow deserves privacy cuz it "means so much to her?" Fuck this clown!!??

He even invoked the name of controversial ICE chief Thomas Homan:

Where's that ICE Nazi Homan when u need him?!

Axl, I love your comments! ! Good stuff for a new album ?

…and others, not so much:

I used to take up for all you. Even when you were being a child treating your fans with no respect. Even wanted you and the boys to succed but now I see you deserved all the pain that you are in. Thanks from a former fan

Feeling insignificant axl? Need another 15 minute ego fix in the limelight? You are acting like a douche but hey whats new.

This tweet by you is disgusting and caused me to get a Twitter account. I can't take hearing vile speech from people like you anymore. The Trump family should sue you for defamation. Melania Trump has done nothing wrong as a First Lady and is an asset to the USA.

Oh, Axl. We can always count on you to keep things… interesting, especially in times like these. We’re dying to know, though: did Axl take it just one step too far?