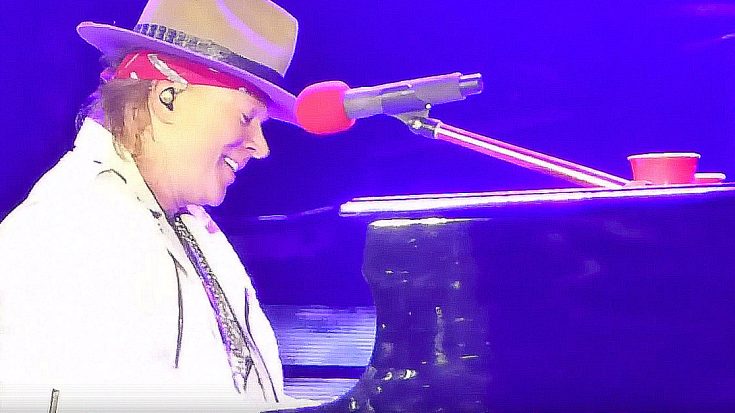 Not In This Lifetime | Houston, Texas

25 years ago, Axl Rose would have thrown a tantrum of epic proportions if a Guns N’ Roses show ran into a snag; throwing his mic down and storming offstage, breaking something, berating a member of his own band, you name it and it was a definite possibility. The Axl Rose we’re seeing these days during Guns N’ Roses’ history making Not In This Lifetime… tour, however, is proving to be lightyears away from the tantrum throwing diva we remember and fans got an exclusive taste of this kinder, gentler Guns N’ Roses frontman at the band’s Friday night show in Houston.

Heading into “November Rain” following an extended jam of “Layla” with Duff McKagan and Slash, Axl is just getting into a groove when you start hearing a strange, off key piano riff over what he’s playing and he tries to continue playing eventually the weird plinky noise becomes both really funny and really distracting, prompting Axl to actually crack a smile before fully laughing and asking, “what the f— is that?”

“I don’t mind ghosts and gremlins,” he jokes, “but they should probably learn the f—ing song.”

It turns out that there’s actually something wrong with his piano, but halfway into the show there’s nothing roadies or techs can do about it so after stopping the band and having a laugh at his own expense, Axl takes it like a champ, starts the band back up and continues singing “November Rain”. It seems like time really does heal all wounds and at this point, we’re so glad to see Axl finally having a great time doing what he loves!