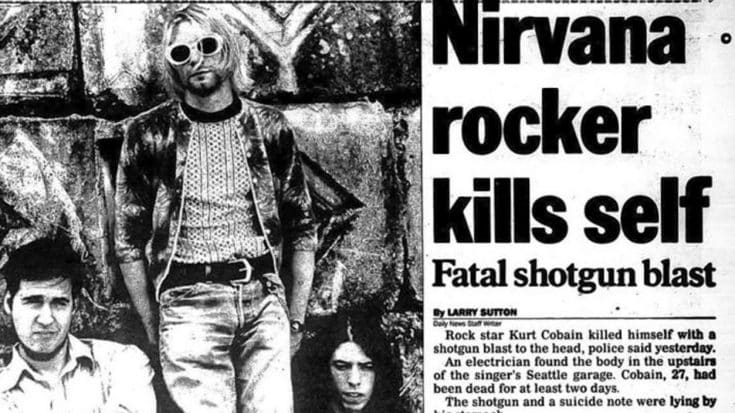 “It’s Better To Burn Out Than To Fade Away…”

On April 5, 1994 the sun rose as it always did and with it, millions of people who had no reason to believe their sleepy Tuesday morning would be any different than usual.

While they got their children ready for school, drank their coffee and headed off to work, Nirvana frontman Kurt Cobain finished up a letter to his wife Courtney and their infant daughter Frances, settled on the floor of his Seattle, Washington home with his driver’s license at his side and, after fumbling around with the double barrel shotgun sitting on his chest, pulled the trigger.

Just like that, the biggest – and unhappiest – rockstar on the planet was gone at the age of 27, leaving behind a family, a career, and more questions than answers. It would be another three days before Cobain’s body was found, discovered by an electrician hired to perform some work on his home and immediately triggering a media storm the likes of which the MTV generation had never seen before.

That week, over seven thousand fans converged on a park at Seattle Center for a public vigil that featured pre-recorded messages from Nirvana bassist Krist Novoselic and Cobain’s own wife Courtney Love, who arrived towards the end of the vigil to tearfully read portions of Kurt’s suicide letter and hand out articles of clothing that had previously belonged to the late legend.

“I’m too much of an erratic, moody, person and I don’t have the passion anymore. Peace, love, empathy, Kurt Cobain.”

24 years on, it’s hard to imagine what would have become of a now 51-year-old Kurt Cobain. Would a sudden burst of creativity have kept him here with us long enough to see him turn gray and embarrass daughter Frances Bean at her wedding?

Would today’s music look and sound drastically different with his influence presiding over it instead of passing the torch to anyone who gave a damn after he was gone?

Or, perhaps the most tragic conclusion of them all: was Kurt Cobain just damned from the very beginning, no matter what he did?