Angus Young’s Interview Discussing Bon Scott’s Passing, Is The Saddest Thing You Will See All Day 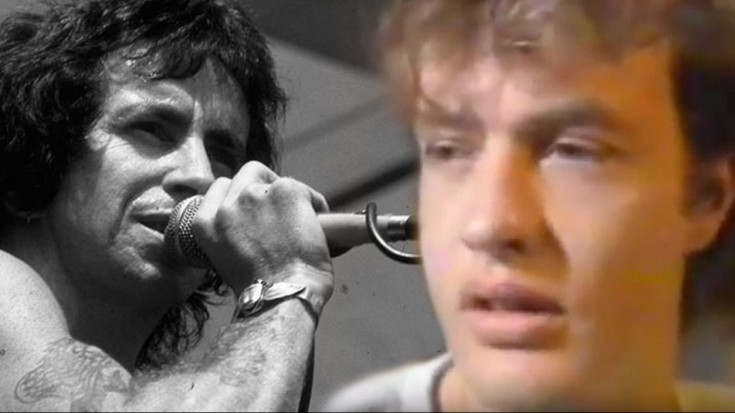 A Day Of Infamy Forever

February 19, 1980 was a hard day for us, especially for the members of ACDC, as it marks the day the world lost one of the greatest singers and performers of the Rock world, Bon Scott. Bon Scott was found deceased as the result of alcohol poisoning and the mistake of passing out in his car, choking to death on his own vomit.

Bon, otherwise Ronald Scott, was born in Forfar, Scotland before experiencing an adventurous childhood in Melbourne, AU starting at the age of six. Bon’s first band, at the age of 14, was known as the Spektors, in which he played drums and occasionally appeared as a lead singer before replacing Dave Evans as lead vocalist for AC/DC in 1974.

Interesting  Fact: Scott was rated on Classic Rock’s “100 Greatest Frontmen Of All Time” before Freddie Mercury and the great Robert Plant, lead singer of Led Zeppelin.

In this interview, you see a beaten down Angus Young trying to maintain through the hard times of a loss of a friend and band mate. Although Angus does not reveal too much emotion, you can tell that the loss took a toll on him on much more than a professional level.

The video even goes on to feature Australia’s very own Stevie Wright describing his perception on Bon’s loss claiming that he had gotten used to death and loss in the last 10 years, calling Bon a good mate but a casualty nonetheless. He goes on to call him a unique performer expressing his sadness at the news at the time and states that alcohol and drugs, especially the combination, can “take anybody at any time.”

We have seen our fair share of rock legends dying at the hands of the drink or powder of their choice, but to see such awful, untimely accidents due to the positioning of a body, it still frustrates us and always will.

We love you Bon, no one will ever replace you.