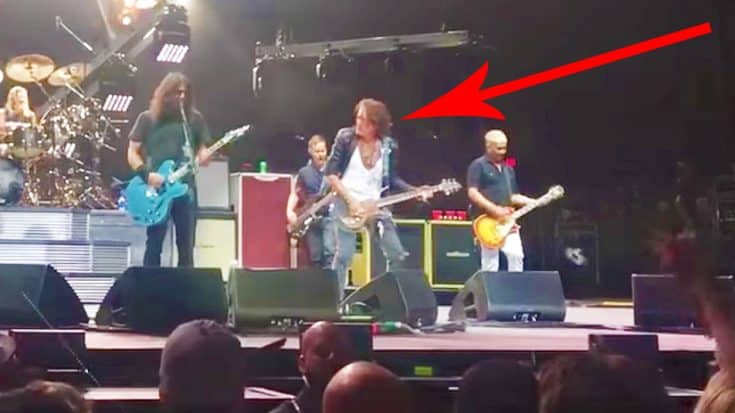 What an amazing night!

This weekend, a historic festival from the 1970’s was resurrected once again. Cal Jam was a popular festival back in the day, and featured bands like Deep Purple, Aerosmith, Black Sabbath and more performing in front of massive crowds at a speedway.

Over the years Cal Jam fell to the wayside and was forgotten, but modern rock and roll legend and hero Dave Grohl decided to bring the festival back to life after decades of being dormant. The festival was brought back to life over the weekend, and there were a few changes. Obviously the bands were quite different, and instead of a speedway, they were only able to secure the San Bernardino Amphitheater  as a venue. But people still camped out and made a whole weekend out of the festival.

The Foo Fighters headlined the event, and treated the evening like an album release party for their new album Concrete and Gold. During their set, they thought it would be appropriate to bring the festival full circle and bring up one of the acts from one of the original Cal Jams. The Foo’s brought up Aerosmith’s Joe Perry to perform a cover of “Draw The Line,” which was performed at Cal Jam 2! It was an amazing moment, and truly brought the festival back for good! They’re already planning on bringing the festival back next year, and we can’t wait!

Check out the video of the Foo’s jamming with Joe Perry down below, and let us know what you think!