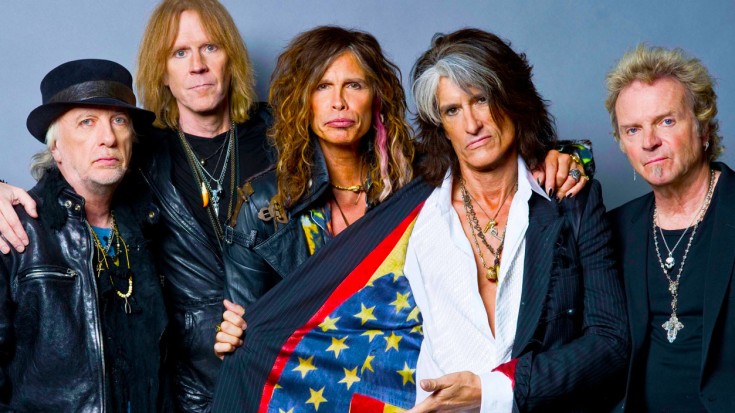 Arena rock legends Aerosmith are in a pretty interesting spot right now. Singer Steven Tyler has effectively put Aerosmith on hold while he pursues his career as a country singer and embarks on his first solo tour this summer, leaving his bandmates in Aerosmith to ponder the same question faced by AC/DC earlier this year as they consider going on their first tour without Steven: “do we wait it out in hopes that things get better and we can get back on track, or do we continue without our lead singer?”

The answer isn’t entirely cut and dry, and the solution isn’t always a clean one – but despite this, Aerosmith’s Joe Perry, Brad Whitford, Tom Hamilton, and Joey Kramer are pondering a possible future tour without Steven. In fact, they’ve even auditioned a few singers over the years in case of such an event; here’s a look at 4 famous rockers the band considered, and the 1 who was actually offered the job:

One of the many singers approached by Joe Perry to possibly fill in for Steven Tyler should Aerosmith decide to move forward without him, former Soundgarden and Audioslave singer Chris Cornell has an absolutely phenomenal voice. Spanning the same raspy blend of rock and blues as Tyler, Cornell’s vocal range would have made him a great deal of fun to hear on songs like “Cryin'” and “Crazy”.

Should Aerosmith move forward without Steven, Brad Whitford says the role of lead singer would be a great fit for a lot of people – including Myles Kennedy. Known for his work with Alter Bridge and Slash feat. Myles Kennedy + The Conspirators, Kennedy’s got the quintessential rock and roll voice a band like Aerosmith looks for. No wonder he made the list!

Paul Rodgers is not only one of the greatest voices in rock music, he’s spent time in some pretty legendary rock bands, too. Whether it’s Bad Company, Free, Queen, or possibly Aerosmith, Paul is more than up to the challenge of stepping into the controversial role of lead singer for a band known for their own legendary singers.

Again, Brad Whitford says that Axl would be another great frontman to step into shoes as big as Steven’s. Hear us out; Axl has proven to be pretty resilient and dedicated after being tapped to sing for Australian rock legends AC/DC, so what’s stopping him from doing guest vocals for Aerosmith should the need arise? He’s great friends with the guys – Steven especially – and would no doubt fit right in both vocally and personality wise.

Yep – The Red Rocker himself was actually chosen by Aerosmith to fill in for Steven Tyler. Sammy confirmed in 2012 that he was approached by Joe Perry to join Aerosmith and offered the job outright when it looked like they wouldn’t be able to continue with him, but legal action from Steven’s team made the move a no go. Still, we have a feeling that if the guys in Aerosmith do decide to hit the road with a new singer, Sammy Hagar can definitely expect his phone to ring!