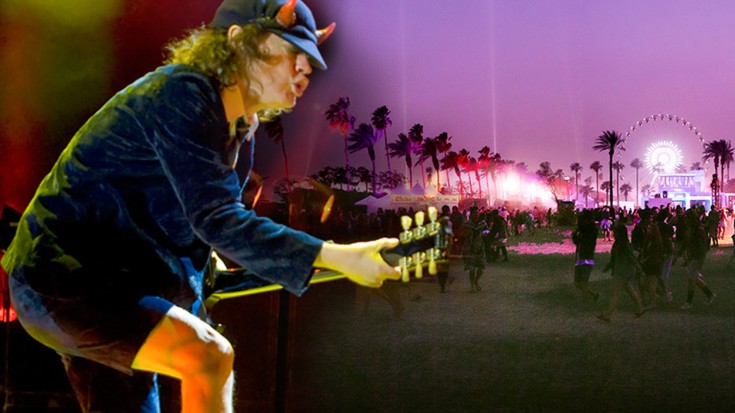 The Coachella Valley Music and Arts Festival is an annual music and art festival that bring thousands of kids and adults alike every long awaited April. The all ages festival sells out within minutes every year, and the line-up is always eagerly awaited by festival loving concert-goers.

The festival’s origins trace back to a 1993 concert that Pearl Jam performed at the Empire Polo Club while boycotting venues controlled by Ticketmaster. The show validated the site’s viability for hosting large events, leading to the inaugural Coachella Festival being held in October 1999 over two days, just three months after the disastrous Woodstock ’99. After no event was held in 2000, Coachella returned on an annual basis beginning in April 2001 as a single-day event. In 2002, the festival reverted to a two-day format. Coachella was expanded to a third day in 2007 and eventually a second weekend in 2012.

AC/DC’s tour which is already generating a ton of revenue, comes in support of their new album Rock or Bust. After co-founder and bandmate, Malcolm Young and drummer Phil Rudd found themselves retired for various reasons, the band finds themselves rocking on with a whole new ensemble. Stevie, nephew of Young will take his spot, while Chris Slade, former AC/DC drummer will replaced Rudd.

Tollett, for one, doesn’t expect the changes to affect the band’s performance at all.“We want to try some fun new things, and AC/DC, no one can argue that they’re one of the best bands live,” he told the Desert Sun. “If you’re a festival promoter, you’ve got to try to go for the ultimate.”

YouTube will stream the whole thing free of charge. I personally think this is one of the greatest live videos of Highway To Hell. I LOVE the crowds energy. Man do these guys know how to rock after all these years!