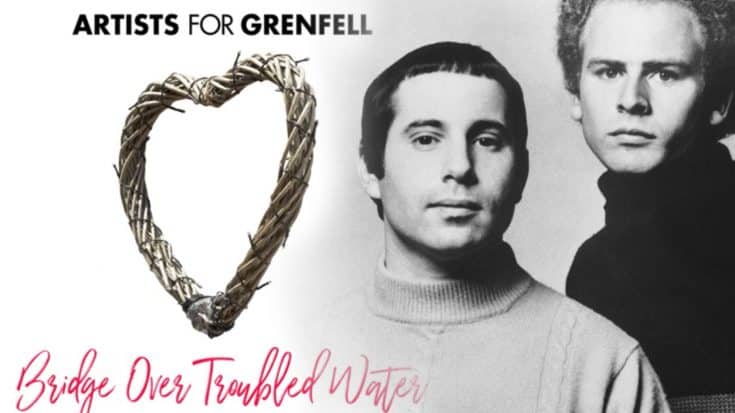 Artists Band Together For 2017 Reboot Of Simon + Garfunkel Classic

It’s been a rough month for citizens of England; between crippling terror attacks that left them badly shaken and an election cycle that seemed to leave more questions than answers, no one could have imagined the horror that unfolded in the wee hours of June 14 as London’s Grenfell Tower went up in flames, claiming the lives of hundreds and leaving survivors destitute.

However, in the wake of unspeakable tragedy we saw the best of humanity as citizens banded together from all walks of life to help in any way they could, with X-Factor judge Simon Cowell leading the charge on an all-star cover of Simon and Garfunkel’s 1970 classic “Bridge Over Troubled Water,” a charity single recorded and released in a bid to raise money for the families of the victims of the Grenfell Tower fire.

Fun Fact: Produced by the duo and Roy Halee, “Bridge Over Troubled Water” was released as the follow-up single to “The Boxer” in January 1970.

With a star studded lineup that includes The Who’s Pete Townshend and Roger Daltrey, Nile Rodgers, members of One Direction and countless others, “Bridge Over Troubled Water” is stunning in both its art and scope; a series of soaring vocal performances from music’s best and brightest paired with its fervent desire to bring some light to an impossibly dark situation, the cover has achieved notoriety as it makes its way into iTunes collections all over the world, raising thousands upon thousands in the five days since its release and climbing to the #1 spot on the UK Singles Chart in a little over 48 hours.

It’s a gorgeous anthem reimagined for a new generation, and we can’t seem to get enough of it; check out “Bridge Over Troubled Water” by Artists for Grenfell in the audio below!