4-Year-Old Drummer – So Good, His Whole Band Stops Playing To Watch Him Jam 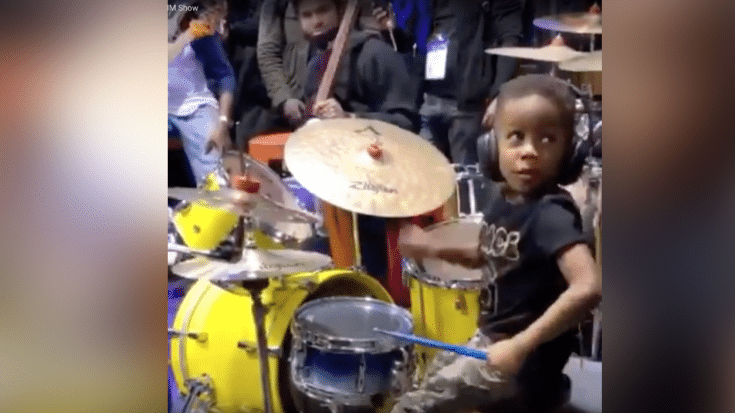 His feet don’t touch the ground when he sits on the couch, he’s got an early bedtime, and he still believes in Santa Claus, the Tooth Fairy, and the Easter Bunny.

We’re talking about 4-year-old viral sensation Justin Wilson II, the drummer currently making rounds across the internet as footage of him drumming at NAMM is popping up on nearly every social media platform in the world. I don’t know what this little guy’s parents are doing, but whatever it is, keep up the good work mom and dad – Justin’s an absolute powerhouse behind that little drumkit, and with over 5 million hits on the original video shared on Twitter by LeauxFi, the entire world knows it now.

According to Justin’s Instagram (@babyboydrummer if you want to give him a follow – he’s adorable and you can see the evolution of his drumming, which is incredible), he was at the NAMM convention over the weekend where he made his big debut at the Gruv Gear booth, jamming with musicians Bubby Lewis, Justin Raines, and drummer Aaron Smith.

Justin had so much fun at his first ever NAMM performance at the @gruvgear booth. And to play with @bubbylewis, @jraines112, and @aaronsmithdrums was definitely a bonus. <Swipe> and check out some clips of the jam. #babyboydrummer #4yearsold #namm @meeaudio @zildjiancompany @pearl_drums

At only 4, Justin was SO GOOD that the band actually stopped playing mid jam to watch him get down behind the kit, pulling off this absolutely incredible little jam that should be enough to convince any non-believers that this kid is the truth and was 100% born with those chops.

Bassist Bubby Lewis was actually crying during Justin’s jam, and after NAMM he took to Instagram to explain why the moment left him so emotional.

The most emotional NAMM I’ve EVER experienced??‍♂️… people wonder why I was crying.. here we see a young 4 yes ole boy just having fun.. that’s it.. he doesn’t care about anything anybody has to say.. doesn’t worry about impressing anybody.. it honestly doesn’t matter what anybody thinks.. no negativity.. he’s just playing drums and having fun??‍♂️ that’s why I was so emotional.. and watching him made me think about my lil 3 year old baby girl.. what will she be passionate about?.. as life comes at us and we get older we begin to grow into our personalities.. we build relationships and all that stuff.. life hits us and we begin to experience fear and sadness.. we care about what people think and say.. we sometimes do things to impress other folks.. but this right here is what we need.. find something we truly love and just do it.. he’s so innocent and such a beast ? @babyboydrummer you are indeed the future.. God got plans for you man.. I look forward to playing with you more lil bro.. @_juswil_ much love to you man.. y’all made me cry all weekend ????.. shout out to @gruvgear for letting us jam and shout out to the bros @jraines112 @aaronsmithdrums as well ??.. we was all emotional ??? shout out to @thenammshow for the opportunity to see and hear the wonderful talent in the world.. the biggest family reunion always lol #babyboydrummer #bubbylewis #namm #nammshow #namm2019 #gruvgear #thefuture

The best part, though, was how much fun Justin had with his new friends over the weekend. The adorable little grin on his face in pictures with his bandmates says it all – Justin isn’t just good at playing the drums, he genuinely loves it and because of that, I can guarantee you that we’ll see some great, great things from this little guy!