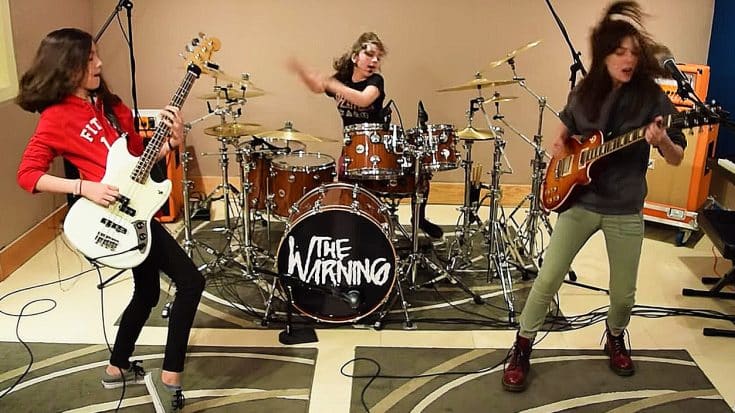 The Warning Return With “Atlas, Rise!”

When The Warning appeared on our radar more than two years ago, we knew these young ladies were something special and that rock and roll was going to do great, great things in their lives. Sisters Daniela, Alejandra and Paulina first made waves with a cover of Metallica’s “Enter Sandman” that was so good it actually got the attention of Metallica’s Kirk Hammett who immediately took to social media to praise the girls for their talent and passion.

Now, more than two years later and with their debut album XXI Century Blood on the way, The Warning are back with their first YouTube cover video after more than a year away recording and studying music and it’s only fitting that they went right back to where it all began: a Metallica cover.

Rocking “Atlas, Rise!” from Metallica’s latest album Hardwired…To Self Destruct, The Warning appear back in their home studio and within the first few seconds it’s easy to see that these ladies have really grown into their craft since last we saw them, their musical identities well established as evidenced by how incredibly comfortable they are thrashing about behind their respective instruments.

Don’t even get me started on their musicianship; from frontwoman Daniela’s chops as a guitarist and singer, to little Alejandra holding it down on bass and drummer Paulina absolutely killing it on drums and vocals, we think it’s safe to offer up another prediction: you’re going to be seeing a lot of The Warning in the next few months and years, and something tells me it’s going to be pretty damned good.