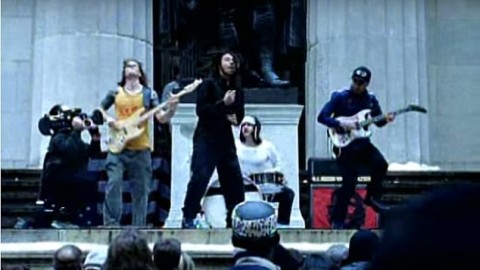 If you can still remember Rage Against The Machine’s music video for “Sleep Now In The Fire” which was released in 1999, it was nominated for Best Rock Video at the 2000 MTV Video Music Awards. Directed by Michael Moore, it shows the band playing in front of the New York Stock Exchange. But what’s really interesting is the part where a guy is holding a sign that says ‘Donald J. Trump For President.’ Wow, that’s creepy and eerily accurate. In addition to the Trump reference, there are also scenes of a game show called “Who Wants to Be Filthy F#&%ing Rich” which is more or less a satirical version of Who Wants To Be A Millionaire?

Vocalist Tom Morello remembered the time they where shooting the video. He said, “Michael basically gave us one directorial instruction, “No matter what happens, don’t stop playing.” Well, I guess we should start watching more of their videos so I can brace myself for any dark days ahead.