10 Rockstars As Youngsters – Can You Guess Who They Are? 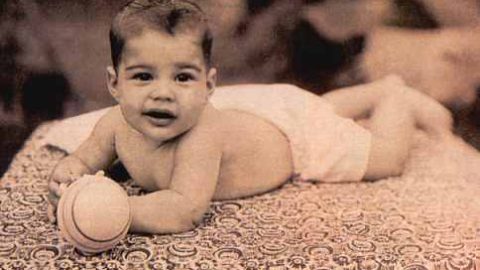 1. Little Did This Host Know He Was Talking To A Rock God.. Who Is It?

Look familiar? Here we have this young fella playing on a television show, rockin’ and rollin’ with his buddies. It’s clear to see that this young lad got his start at shredding the axe from a very early head start. Little did the host know, he was talking to one of the ‘greatest guitarists of all time’. You might be able to recognize who it is based on his…eyes! Look closely and try to imagine who it is. Do you know?

Yes, it’s Jimmy Page! The iconic guitarist of Led Zeppelin out of Heston, London has had one of the biggest careers as a rockstar, ever. His career has reached the pinnacle of rock success spanning over 5 decades, hitting all over the world, and he continues to rock out even to this day, although not as much.

2. This Adorable Little Boy Co-Founded His Own Band And Became One Of The Most Celebrated Songwriters In History… Who Is It?

Who would’ve thought this young school boy has what it takes to change rock ‘n roll? He learned to play the banjo at 11 years old and also showed promise in drawing comical cartoons. At 16, he got his first guitar. It was a gift from his mother who’s very supportive of her son’s musical aspirations. Well, what can we say? It did pay off BIG TIME!

Whether as part of The Beatles or as a solo artist, John is a musical genius and is one of the most iconic names in the history of rock n roll. He has wrote and co-wrote some of the timeless classics like “Imagine”, “She Loves You” and “Come Together”. His songs are still being covered today and he remains to be a huge influence to the next generation of singers and songwriters.

3. From Simple School Boy To Legendary Rock Persona… Who Is It?

I’ve no doubt this will be an easy guess for you. Okay, let me drop in some clues: he’s flamboyant and an outstanding performer. We’re not sure what that trophy is for though but it could have something to do with his musical prowess — maybe a singing competition of sorts. But whatever, he’s an accomplished rock musician and a talented songwriter at that!

The One And Only! He was hailed by AllMusic as  “one of rock’s greatest all-time entertainers” and it’s not at all surprising, to say the least. Have you seen him sing in front of an audience while riding atop Darth Vader? Or that unforgettable performance at Live Aid? It doesn’t matter how many artists covered ‘Bohemian Rhapsody’, Freddie Mercury’s version will always be the best.

If this isn’t the cutest little rockstar! We’re not sure which is more adorable — those puppy-dog eyes or that sweet, sweet smile? Either way, we can tell he’s going to take the world by storm one day. And that ‘storm’ meant jaw-dropping axe skills which can impress even the most seasoned guitarists. Care to take a guess who this icon is?

Yes, it’s one of the most influential electric guitarists of all time! He started showing his interest in playing the instrument when he carried a broom around, emulating a guitar. We can’t help but be amazed with Jimi’s passion for music and it translates with every note, every song he plays.

5. The Effect Of Those Melting Brown Eyes Is Undeniable… Who Is It?

His father was a pianist and trumpet player so it’s no surprise when this lad inherited such love for music. Even though his father urged him to take piano lessons, this talented young boy eventually learned to play the instrument by ear. When he received a trumpet as a gift, he traded it for an acoustic guitar. And that, ladies and gentlemen, is how it all began…

Those eyes were dead giveaways , anyway. Lol. Though being the bassist for The Beatles was what propelled him toward international stardom, his solo career was just as successful. Come on, he’s already 73 and still doing live shows. We can only wish we’d be half as cool as him at that age!

6. One Of Pop Culture’s Most Rebellious Icons… Who Is It?

For the record, he may not look like it here but it’s the same rock star known for his wild personality and dramatic antics. He once led a bohemian lifestyle as he was writing his band’s early songs. This brilliant songwriter is also known for poetic lyrics and for spoken word passages during their live shows. Who’s your guess?

The ‘King of Orgasmic Rock’ is widely considered as one of the most iconic frontmen in the history of rock ‘n roll. From songs to shows, there have been several references to Jim Morrison (just ask Homer Simpson). Everyone loves his charisma and although his death has been clouded by mystery and controversy, he left us with the gift of his music.

7. You Wouldn’t Believe What Became Of This Young Lad… Who Is It?

Is it just us or is this young fresh-faced dude looking at the camera and thinking, “You’re gonna want my autograph in the next few years.” You see, he wouldn’t grow up to be just ANY rock star. He’s going to be an innovator and trend-setter. Oh, I can see your face light up with recognition now…

It’s the Man Who Sold The World, Ziggy Stardust, or Goblin King Jareth. Whatever you decide to call him, he set the trends for both music and fashion. He has influenced the subsequent generation of musicians and we were all grateful for his various musical experiments. Yes, we know. We suddenly missed him again too.

If I tell you right now who this preppy young man in a crisp suit it, you’ll most likely say: “No way Jose!” Yeah because that’s our same exact reaction. One look and you’d think he’ll change the world with science. But no, he changed the world with his music… Ready to know who this is?

Surprise! Ronnie James Dio, with his trademark ‘metal horns’ sign, is not just famous for his powerful vocal range but also for the medieval theme in his song lyrics. He’s so versatile he can go from hard rock to ballad and it will still give you goosebumps each time!

That smirk says it all. He knew he was going to be one heck of a rockstar and we’d all be unearthing his old photos. Lol. We’re not sure if his hairstyle was Beatles-inspired but it looks good on him. *hint, hint* We prefer the longer locks though!

It’s going to be a very busy year for GnR frontman Axl Rose what with their comeback gig, series of concerts and of course — the talk about being AC/DC’s newest vocalist. He’s never too old to rock and even with an injured foot, he can still take the stage and give you a spine-tingling performance.

10. This Guy In A Crisp Suit Means Business… Who Is It?

We’re so used to seeing his unique sense of style that we’re basically at a loss for words when we see him in a nice suit. Yes, this guy’s a full-time rockstar with an extremely colorful career. And oh, he’s also called the ‘Demon of Screamin”. Guessed it yet?

You may not have recognized the younger Steven in the photo but you’ll definitely have no difficulty recognizing his distinctive high scream whenever he sings. Though he has transitioned from rock to country music, we’ll forever be fans. Have we already told you he’s an all-around good guy too?

You may want to keep your old photos. Who knows, you might end up being a rock star one day and everyone will start digging your snaps!