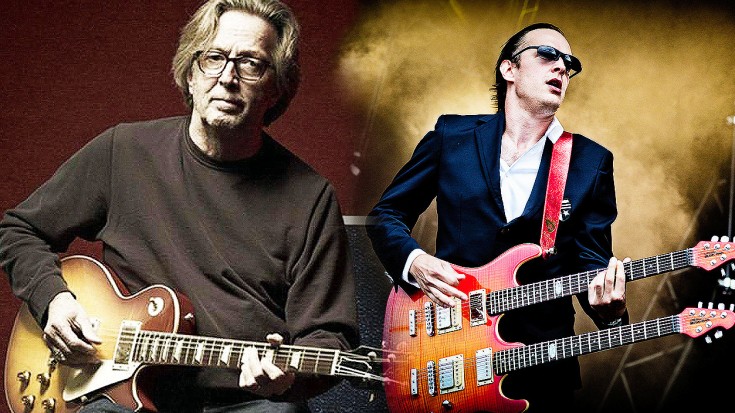 Rock musician Joe Bonamassa apparently knows the status and location of one of Eric Clapton’s most iconic guitars. The guitar is a 1960 Les Paul Standard, which Clapton used to record the 1966 album Blues Beakers with Eric Clapton with John Mayall’s band.The guitar became known as the “Beano,” because on the cover art of the album, Clapton is reading The Beano, a childern’s comic book in Britain. Following the album, Clapton left Mayall’s group, and formed Cream. While in the rehersal studio with Cream in 1966, “Beano” was stolen and never heard, or seen of again. Until now.

“It’s in a collection on the East Coast of America. That’s all I can tell you and that’s all I will say…It still exists. I haven’t seen it, but I have it on good authority from people who have.”- Bonamassa revealed

Bonamassa continued to elaborate, wondering if Clapton would even still want, or even recognize the guitar after 50 years since it was stolen. The 1960 Les Paul Standard Clapton used has a cherry red sunburst finish. Earlier this year, Jimmy Page was able to track down and recover his 1960 Les Paul Standard that was stolen from him in 1970. Typically, Original Les Paul Standards run for an astonishing $150,000- $500,000 depending on their condition. Obviously Standards previously owned by rock legends can run for way more.

The clip below features a song Clapton did with Mayall, and pictures of him clearly wielding “Beano.”