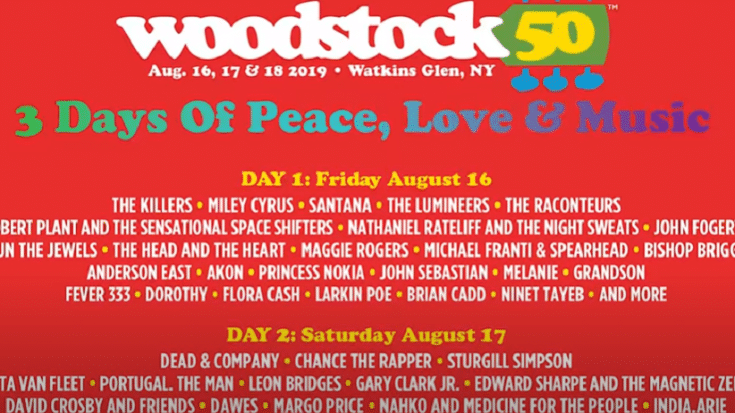 The Organizers Are Accusing The Company of “Sabotage”

Woodstock 50 organizers are filing a lawsuit against their former financial partner Dentsu Group and its affiliates Dentsu Aegis Network, MKTG, and non-party Amplifi Live, LLC. They’re accusing them of being “directly responsible for the destruction of the Woodstock 50 Anniversary Festival” in a new complaint filed on Wednesday in New York Supreme Court. According to the suit, the plaintiffs are seeking millions of dollars for compensatory and punitive damages.

Woodstock 50 was supposed to commemorate the 50th anniversary of the historical event in 1969. It was scheduled to take place on August 16-18, 2019 in Watkins Glen International in New York but didn’t push through because of legal problems and other setbacks such as booked artists dropping off. Dentsu Group cut ties with the festival organizers and after they pulled out, they initially canceled Woodstock 50 even though the organizers pointed out that they didn’t have any legal right to do so.

A spokesperson for Dentsu denied the allegations. And a representative for Amplifi Live told Rolling Stone, “Dentsu’s affiliate, Amplifi Live, acted in the best interest of the public last year after Woodstock 50 breached its agreement. After a full evidentiary hearing, the court credited Amplifi Live’s evidence that a safe and profitable festival could not be mounted, and therefore refused to order Amplfi Live to continue funding the project.”

The suit also adds, “Despite Woodstock 50’s best efforts, Dentsu’s sabotage was effective and complete, and directly resulted in huge damages to Woodstock 50. As a result of Dentsu’s egregious conduct, Woodstock 50 is entitled to tens of millions of dollars in compensatory and punitive damages.”