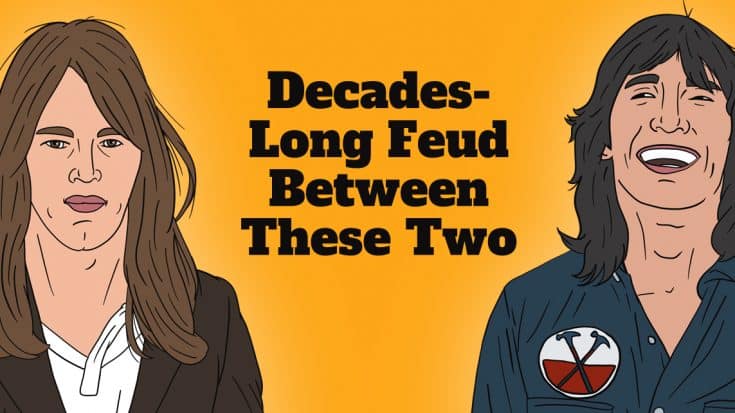 One thing that separated Pink Floyd from other rock acts was the fact that they deigned to do what others couldn’t dare. They took massive risks, employing studio techniques and effects that their peers were yet to discover. From their songs to their stages, they upped the ante every single time. They created songs that aged fairly well with themes and messages that remain relevant today.

But alongside the band’s collective greatness and genius is the dysfunctional and rather baffling relationship between Pink Floyd’s creative forces – Roger Waters and David Gilmour.

Over the years, the rift between the two of them has become widely known and much talked about. Disagreements are par for the course in every group but Waters and Gilmour took their feud public and even to the courts. As such, we’ll explore what happened and why, even after all these years, they’re still not on good terms.

It’s hard to pinpoint when it all began exactly but we can safely assume that it’s been brewing for years particularly when they released The Final Cut in 1983 – an album which was written by Waters and when Gilmour asked for more time to write songs, the former refused. To which Gilmour later commented, “I’m certainly guilty at times of being lazy … but he wasn’t right about wanting to put some duff tracks on The Final Cut.”

In 1985, Waters left Pink Floyd and it wasn’t an amicable separation. He even went to the High Court in an attempt to dissolve the band and prevent them from using the Pink Floyd name. Two decades later on July 2, 2005, Waters and Gilmour reunited with Richard Wright and Nick Mason for a one-off performance at Live 8.

Waters then admitted, “I don’t think any of us came out of the years from 1985 with any credit … It was a bad, negative time, and I regret my part in that negativity.”

But as for Gilmour, he told the Associated Press: “The [Live 8] rehearsals convinced me [that] it wasn’t something I wanted to be doing a lot of … There have been all sorts of farewell moments in people’s lives and careers which they have then rescinded, but I think I can fairly categorically say that there won’t be a tour or an album again that I take part in. It isn’t to do with animosity or anything like that. It’s just … I’ve been there, I’ve done it.”

And in a 2013 interview on BBC’s HARDtalk programme, Waters revealed that he regretted the lawsuit. He said, “I was wrong! Of course I was. Who cares?… It’s one of the few times that the legal profession has taught me something.”

He added, “Because when I went to these chaps and said, ‘Listen we’re broke, this isn’t Pink Floyd anymore,’ they went, ‘What do you mean? That’s irrelevant, it is a label and it has commercial value. You can’t say it’s going to cease to exist… you obviously don’t understand English jurisprudence.'”

In 2014, Pink Floyd released The Endless River which is a tribute to late keyboard player and founding member Richard Wright. Waters wasn’t even invited. Gilmour told Rolling Stone, “Why on Earth anyone thinks what we do now would have anything to do with him is a mystery to me. Roger was tired of being in a pop group. He is very used to being the sole power behind his career. The thought of him coming into something that has any form of democracy to it, he just wouldn’t be good at that. Besides, I was in my thirties when Roger left the group. I’m 68 now. It’s over half a lifetime away. We really don’t have that much in common anymore.”

For years, drummer Nick Mason has kept mum about Waters and Gilmour’s relationship but speaking to Rolling Stone magazine in 2018, he reflected on their decades-long beef.

He shared, “It’s a really odd thing in my opinion. But I think the problem is Roger doesn’t really respect David. He feels that writing is everything, and that guitar playing and the singing are something that, I won’t say anyone can do, but that everything should be judged on the writing rather than the playing.”

He continued, “I think it rankles with Roger that he made a sort of error in a way that he left the band assuming that without him it would fold. It’s a constant irritation, really, that he’s still going back to it. I’m hesitant to get too stuck into this one, just because it’s between the two of them rather than me. I actually get along with both of them, and I think it’s really disappointing that these rather elderly gentlemen are still at loggerheads.”

Reflecting on their ongoing feud, Mason mused: “I think it comes and goes. And I think it can be exacerbated by some specific difference of opinion on a re-release and how it should be approached or what should be done.”

He also admitted that although he doesn’t think they would ever reunite and be back on the road as Pink Floyd, he believes that “it would seem silly at this stage of our lives to still be fighting.”

Last year, Waters took to social media to lament that he’s been banned on Pink Floyd’s website. He told his followers, “David thinks he owns it. I think he thinks that because I left the band in 1985, that he owns Pink Floyd, that he is Pink Floyd, that I’m irrelevant and I should just keep my mouth shut.” He went on to say that “This is wrong. We should rise up. Or, just change the name of the band to Spinal Tap, and then everything will be hunky-dory!”

However, on September 6, Pink Floyd’s official channels greeted Waters on his 77th birthday possibly suggesting that the feud MIGHT be over. At least, for now.