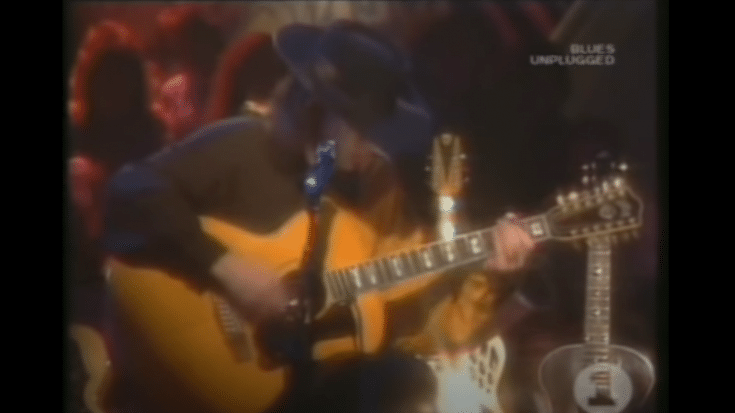 Stevie Ray Vaughan may be known for his electrifying and powerful performances but on January 30, 1990 at National Video Center in New York City, he proved that he also knew how to hold back when the occasion called for it. He appeared on MTV Unplugged, performing acoustic versions of his songs and let’s just say, it’s nothing short of magical and mesmerizing.

He traded his Fender Stratocaster for a 12-string Guild acoustic guitar and his set was unlike anything the show has witnessed. MTV Unplugged had no shortage of talents but SRV brought something different, unique, and exciting when he appeared on the show.

He gave everyone a masterclass when he tore through his solo which drove everyone in the audience wild. He kicked off his set with “Rude Mood” and followed it up with “Pride and Joy” before concluding his performance with “Testify.” It takes an insane amount of energy and talent to power through the songs.

SRV said in an interview with Guitarist magazine, “With that kind of an influence as your big brother it’s real easy to get into playing. I saw how much fun he was having with it, and I saw how dedicated he was to it, and it gave me a lot of inspiration.”