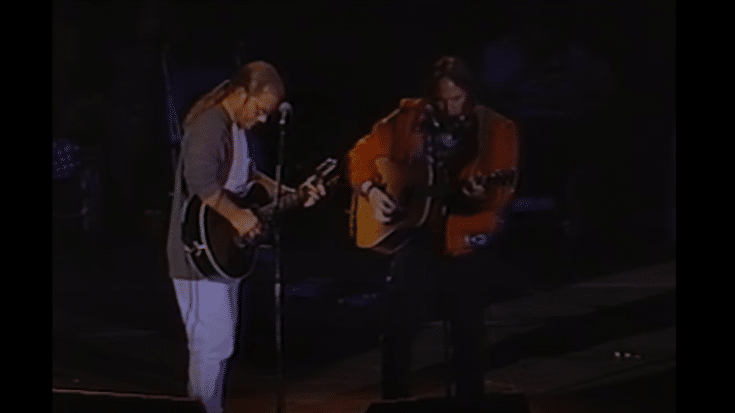 via Warren Zevon on MV/YouTube

Not Their First Performance Together

Warren Zevon and Neil Young teamed up on November 6, 1993 at the Shoreline Amphitheatre in Mountain View, CA for a live performance of Zevon’s 1989 “Splendid Isolation” with Young providing backing vocals. Young was also featured on Zevon’s seventh studio album “Traverse City.” Aside from “Splendid Isolation,” Young took over the lead guitar duties for “Gridlock.”

The pair first performed the track in July 1992 at the Winter Park Resort in Colorado. The collaboration below was for the Bridge School Benefit hosted by Neil Young. Before launching into the song, Zevon told the audience: “Neil was kind enough to sing this next song with me from some album of mine.”

Meanwhile, Neil Young has been pretty active online since the start of the coronavirus crisis. He’s been sharing at-home performances for his Fireside Sessions filmed by his wife Daryl Hannah. He wrote on his website, “Because we are all at home and not venturing out, we will try to do a stream from my fireplace with my lovely wife filming. It will be a down-home production, a few songs, a little time together.”

And aside from the highly anticipated “Homegrown” LP, he’s recently announced the release of a new archival album titled “Road of Plenty.”