Watch Dave Grohl and Billie Eilish Perform “My Hero” Together 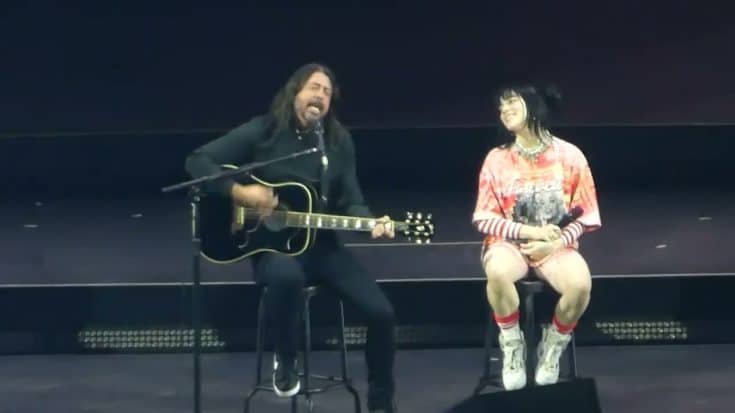 Dave Grohl performed an acoustic version of “My Hero” onstage together with Billie Eilish during her concert on Thursday at the Kia Forum in Los Angeles. The performance was dedicated to the late Foo Fighters drummer Taylor Hawkins.

Eilish announced to the crowd:

“You guys, I would like to invite a friend of mine onstage. You knew it was coming! Everybody, please make some noise for Dave Grohl.”

The 20-year-old pop star has already paid her tribute to Hawkins at this year’s Grammys by wearing a shirt emblazoned with a picture of the drummer. Eilish also reflected on this by saying “it was extremely upsetting” during an interview on the red carpet.

Grohl then said to the audience about Eilish’s tribute:

“Earlier this year, all of the Foo Fighters and our families gathered together at my house to watch the Grammys, and when Billie came out for her performance in a Taylor Hawkins T-shirt, the room was filled with real tears of love and gratitude.

“So from our families, who are here tonight, the Hawkins family and everyone, we’d like to thank you very much for that. So let’s sing it for Taylor.”

The second Hawkins memorial event took place at the Kia Forum in late September. It was attended by some of the big names such as Joan Jett, James Gang, Them Crooked Vultures, Wolfgang Van Halen, Def Leppard, Queen, and many other icons.