U2 Went Busking In NYC Subway – And No One Recognized Them! 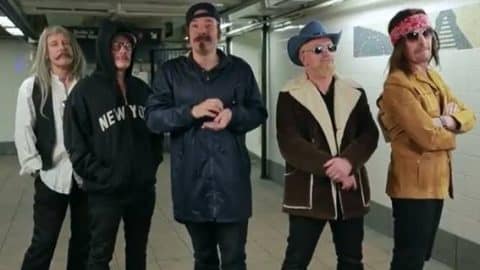 Jimmy Fallon had U2 as his featured guests on The Tonight Show. Now, it’s been known that Fallon likes to play games and do sketches with his guests on the show but when U2 came on, he had them wear disguises as they went on busking in New York’s 42nd Street Subway station in Manhattan.

“Nobody knows this is going to happen. Nobody knows it’s U2, They’re just going to get out there and do it.” said Fallon, who also donned a disguise and some spy camera sunglasses.

With Bono sporting a blond wig and some blond facial hair, the world-renown Irish rock band began busking “I Still Haven’t Found What I’m Looking For”. Passersby did not recognize the band but some were taking double takes probably hearing the familiar voice singing this familiar song. Eventually, Fallon and the rest of the band couldn’t keep the ruse up for too long anymore and they revealed themselves, taking off their fake facial hair, which in turn drew a large crowd for U2’s impromptu subway concert. The band went on to play an acoustic rendition of “Desire” much to the wild delight of regular subway goers.