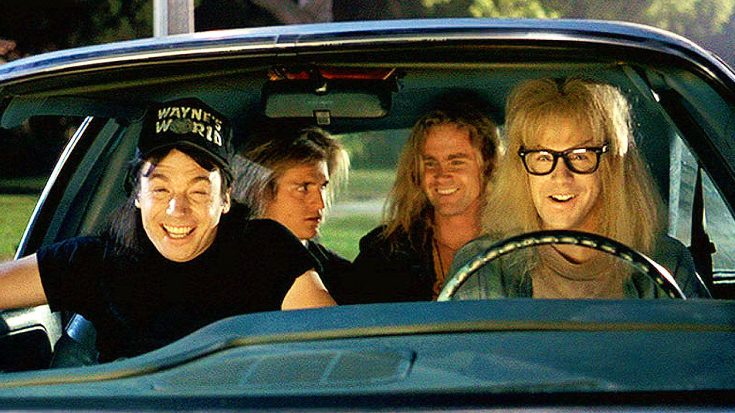 10. “Twist and Shout” by The Beatles — Ferris Bueller’s Day Off

What do you do during your “ninth sick day of the school semester”? Well you crash a parade in the heart of Chicago, and get the entire crowd dancing with a rendition of the Beatles classic “Twist and Shout.” In this scene Michael Broderick’s character Ferris Bueller does just that, and sends the entire crowd into a frenzy in this 1986 classic about ditching school with your friends.

According to director John Hughes the scene was shot during an actual parade, with most of the scene being very spontaneous! When they went back to gather other shots for the scene about a week later, they sent out a radio announcement and asked people to show up for extras. Hughes said that over 10,000 people showed up to the filming.

The final and most important rule in Damone’s “5 point plan” in Fast Times At Ridgemont High, is “when it comes to making out, whenever possible, put on side 1 of Led Zeppelin IV.” In this hilarious scene, Damone is giving his friend Ratner some pointers for a date. While on a date, Ratner is seen driving him and his date and blasting “Kashmir.” Only problem is that “Kashmir” is on the album Physical Graffiti, not Led Zeppelin IV. Led Zeppelin are famous for putting a hefty grip on allowing the usage of their music in media.

That being said, Zeppelin probably restricted director Cameron Crowe from using anything off of Led Zeppelin IV, leaving Crowe to settle for a song they would actually let him use. As far as the scene goes, there are two theories behind the hilarious mix-up: 1. The couple in the scene are not making out, therefore no need for Led Zeppelin IV, or 2. Ratner is so geeky, he put on the wrong album. Either way, it serves for a hilarious scene.

Forrest Gump won “Best Picture” at the 67th Academy Awards for many good reasons. One of them being the exceptional use of music in the film. From Lynyrd Skynyrd, to Elvis and Bob Dylan, the film explored, and touched on so many of music’s classics. But one sticks out among the rest, and that’s CCR’s “Fortunate Son.”

The song plays as Forrest is riding in a chopper with his friend Bubba, when they first arrive in Vietnam. It accompanies a wonderful shot a machine gun pointing down on the lush green and flat ground down below, as well as when the chopper finally arrives at the camp. Ironically, “Fortunate Son” is actually an anti-war song, and gives the scene a great juxtaposition and reference surrounding the many protests around the war Forrest is about to fight in.

What’s the best way to kick off a movie about fighter pilots? Using Kenny Loggin’s hit “Danger Zone,” of course! The use of the song in the opening credits scene is perfect. After watching a dark scene of the pilots walking to their aircrafts and preparing for take off, the tune kicks in as soon as the engins are ignited and the fighter jets take off. It’s the perfect opening to a classic Tom Cruise flick about fighter pilots. Loggins performed the song for the movie, and it was released on the movie’s soundtrack in 1986.

Fun fact: Toto were originally going to be the band to record “Danger Zone,” but due to legal reasons they were unable to. Although Toto would have been interesting, Loggins turned in one hell of a great song that fit perfectly for this movie.

6. “In Your Eyes” by Peter Gabriel — Say Anything…

Another Cameron Crowe film finds its way on to our list. This time, it’s his 1989 romance film Say Anything… You know the scene: John Cusack’s character, Lloyd Dobler, stands outside of Diane Court (played by Ione Skye)’s window with a boombox over his head blaring Peter Gabriel’s romantic tune “In Your Eyes,” in hopes of winning her love back.

It’s a pretty iconic scene that has been copied and parodied through the ages. But nothing will compare to the original, and there’s no way an iPhone will ever produce as much noise as Cusack’s boombox. The song serves as a wonderful use for this romantic film, and tear-jerking scene for every hopeless romantic.

5. “Layla” by Derek and the Dominos — Goodfellas

Derek and the Dominos’ “Layla,” is more frequently known for its opening riff. In fact, guitarist Eric Clapton made the song even more popular with his solo acoustic rendition of the tune. But in Martin Scorsese’s  gangster film Goodfellas, neither the opening riff or Clapton’s acoustic set the mood for this iconic scene.

The middle section of “Layla,” which features a piano interlude, shines in this iconic scene of Goodfellas when Jimmy Conway (played by Robert Di Niro) begins to eliminate all of his ties from the Lufthansa robbery. The last half of this song serves as a perfect way to kick off the last half of this wonderful masterpiece of a film. What a great way to incorporate a very underrated part of this Derek and the Dominos/Clapton classic!

4. “Stuck In The Middle With You” by Stealers Wheel — Reservoir Dogs

It’s almost impossible not to think of Quentin Tarantino’s Reservoir Dogs when you hear this song by Stealer’s Wheel. Unless, of course, you’re the cop in this scene. Then it’d be hard for you to hear the song in the first place. Sorry, too soon? Anyway, if Tarantino proved anything in this scene it’s that if you ever feel like sawing someone’s ear off, your best bet is to tie them down, blast “Stuck in the Middle With You,” dance around and then proceed with the ear cutting.

The iconic scene serves as a major turning point in the film, as we go from a quirky violent movie, to a straight up classic Tarantino brutal bloodbath of a movie. Tarantino changed this odd, yet catchy, 70s tune forever with a 2 minute torture scene.

When he travels back to 1955, Marty McFly (played by Michael J. Fox) scares everyone at his parent’s school dance by shredding an epic version of Chuck Berry’s “Johnny B. Goode.” Although the people of the past may not have been ready for McFly’s version filled with hammer-ons, power chords and aggressive manner, the use of the song once again made it fresh. The scene has been parodied numerous times, and even created the longtime joke of Chuck Berry stealing the song because of a phone call from his cousin Marvin.

Although many believe that Fox is actually playing the tune, he isn’t. A guitar coach taught Fox a technique that would make his “playing” look identical and realistic. The actual performance in the movie was done by Mark Campbell (vocals) and Tim May (guitar/solo).  He sure had us fooled, which is why this is number 3 on our list!

Ever wanted to just blast music in your house and dance along to a great song? Well, Tom Cruise’s character in Risky Business does just that in this coming of age film. After experimenting with liquor for the first time, Cruise’s character Joel Goodson strips down to nothing but underwear and a pink dress shirt, crank’s Bob Seager’s “Old Time Rock & Roll,” and lets it all go with a free spirited dance.

Almost every TV show to ever exist has parodied the scene to some extent, and Goodson’s apparel in the scene has become a popular pick for a Halloween costume. When asked about the scene, Cruise said that his ideas for the moves were all in his head and completely improvised. Makes perfect sense, and gives the scene an authentic feel.

If you’re a true fan of classic rock, you have 100% reenacted this scene. It’s the opening scene of one of the goofiest movies ever created. Originally based on a Saturday Night Live skit, the opening scene of Waynes World shows main characters Wayne (Mike Myers) and Garth (Dana Carvey), along with a few friends, driving down the street blasting Queen’s classic “Bohemian Rhapsody.” The crew sing along to Freddie Mercury’s wide variety of parts, and when the solo hits, they showcase an epic headbanging session.

What makes this scene so wonderfully genius, is that “Bohemian Rhapsody” is probably the last song you would expect anyone to headbang to. Originally the studio desired a Guns N’ Roses song playing during the scene, but Myers demanded “Bohemian Rhapsody,” and threatened to quit if the song wasn’t used. Following the release of the movie, the song shot to #2 on the billboard charts 17 years after its release. Unfortunately, Mercury died a few months prior to the release of the film. But luckily, Myers contacted Brian May and sent him a tape of the scene before the film released.

“Mike gave me a tape which I took ’round to Freddie and played to him. Freddie loved it. He just laughed and thought it was great, this little video. The funny thing was, we always regarded the song as tongue in cheek ourselves. If it would come on the radio, we would all be headbanging when it came to the heavy bit as well, us as a group. It was very close to our sense of humor.”- Brian May