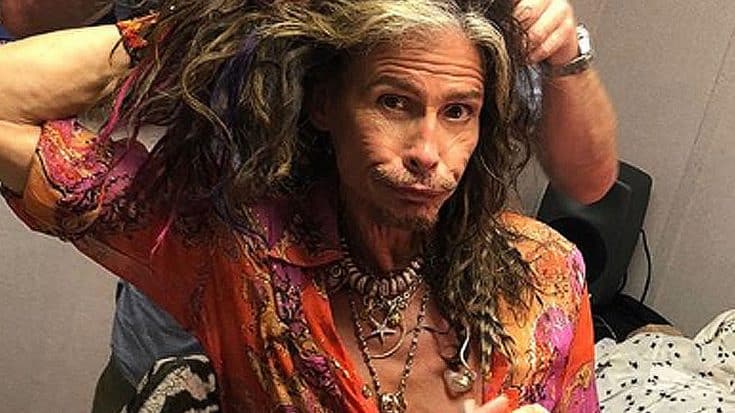 Tyler Gets Dolled Up Backstage With A Little Help

When you’re one of the biggest rockstars on the planet, you can afford to travel with your own crack team of stylists and makeup artists.

When you’re Steven Tyler, you don’t hire just anyone – you hire the best.

That’s right, folks! Earlier this week, Steven was spotted backstage getting ready for his performance at Central Park SummerStage, with Scrubs actor Zach Braff putting the “finishing touches” on the absolutely hilarious hairstyle he gave Steven. Braff, 43, shared the photo to Instagram, showing off his handiwork with a curling iron while his “client” Steven serves a silly look at the camera.

With a caption that reads “Finishing touches before SummerStage Show on @iamstevent,” Braff’s photo leaves us cracking up and asking so. Many. Questions. Does Zach do nails? How much does he charge? Is he using a heat protectant on Steven’s luscious locks? What kind of style was he going for? TELL US, ZACH!

Apparently, we’re not the only ones with questions and a few concerns:

You sure it’s not someone’s grandma?

I have a lotta questions, but I'm here for this.

WHAT IS EVEN HAPPENING HERE??

How much do you charge?

Did you get to do his nails, too?

Seriously need to know the backstory on this.

All jokes aside, Steven looks fantastic and we’re so, so glad that he’s friends with Zach Braff – what a gifted actor! He’s healthy, happy, and as well rested as any rock legend deserves to be and after the busy year he’s had hitting the road and doing wonderful things for the community with Janie’s Fund and now Janie’s House, even the hardest working man in rock and roll deserves to be pampered a little!