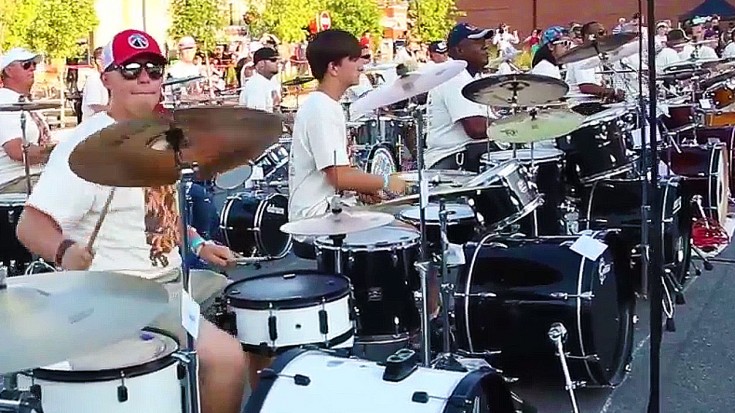 We’ve seen fans of the Foo Fighters get together in Italy, jamming “Learn To Fly” at numbers reaching over 1,000 in a bid to get the band to play the tiny town of Cesena, but never one to be outdone the great state of Alabama held a similar event last month in honor of Make Music Day, inviting over 850 people out for an epic jam session of Lynyrd Skynyrd’s 1973 smash hit “Sweet Home Alabama”. With a goal of making it into the Guinness Book of World Records as the largest performing rock band, the point of 850 playing “Sweet Home Alabama” wasn’t to see who sounded the best. People of all shapes, sizes, and colors brought out drum kits, guitars of all kinds, microphones and other fun instruments to jam the song that over time has become their unofficial state anthem in the name of something far bigger than themselves.

Fun Fact: As of 2016, there are only 35 cities in the United States that participate in Make Music Day.

In fact, it’s pretty hard to watch this video and not be moved by the sight of nearly 900 people coming together in the name of Lynyrd Skynyrd, their home state, and all things good old fashioned rock and roll. If you’ve ever wondered how amazing a song like “Sweet Home Alabama” would sound like with hundreds of people playing it at one time, never fear: we’ve got you covered with the footage from this momentous occasion in the video below!