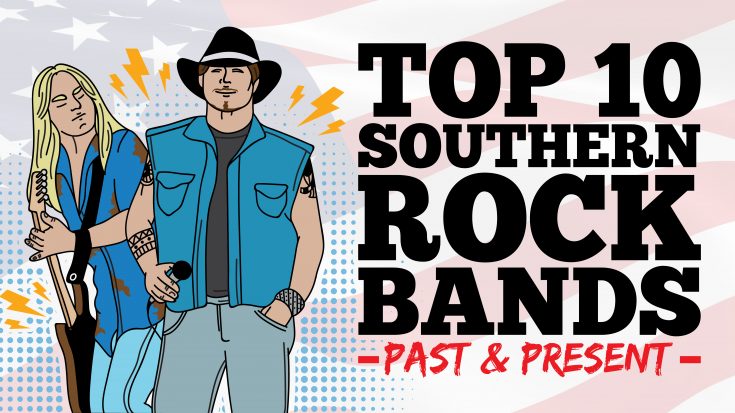 One of America’s most loved institutions since the dawn of baseball, bbq’s, and freedom, Southern rock has not only kept us dancing for half a century but changed the landscape of rock music as we know it. With elements of country music, rockabilly and the blues fused together with good old fashioned rock and roll, Southern rock has spawned some of music’s best and brightest visionaries – musicians who through simply telling stories about what they knew and loved and setting it to a fantastic rhythm went down in history as legends without whom rock and roll would look very, very different.

From Lynyrd Skynyrd to Kentucky’s Black Stone Cherry, let’s take a look at 10 of Southern rock’s biggest legends who changed the game forever – and the next generation of rockers tapped to carry on the family tradition.

If you haven’t checked out Black Stone Cherry yet, stop what you’re doing and listen to their take on Marshall Tucker Band’s “Can’t You See” – it’ll blow you away! Formed in Edmonton, Kentucky in 2001 Black Stone Cherry are the real deal as far as carrying on the Southern family tradition of dishing out hard rocking music with a Southern rock twist on it. It doesn’t stop there, though; with drummer John Fred Young as the son of The Kentucky Headhunters’ rhythm guitarist Richard Young, the Southern rock royalty flowing through their veins pretty much ensures that Black Stone Cherry will not only proudly carry on the legacy, but create a lasting legacy of their own.

One of the most important figures in both country music and Southern rock, The Charlie Daniels Band is probably best known for 1979’s #1 country hit “The Devil Went Down To Georgia,” but Charlie’s influence in music goes as far back as the 50’s. He’s helped mold the sound of fellow Southern rockers the Marshall Tucker Band by playing fiddle on many of their early albums, and it was at his 1979 Volunteer  Jam V that fans saw Lynyrd Skynyrd take the stage for the first time since the crash in 1977. The Charlie Daniels Band isn’t just an iconic figure in the Southern rock community – it’s one of the cornerstones of the genre.

Spartanburg, South Carolina natives The Marshall Tucker Band burst onto the scene in the early 70’s and are credited with helping establish Southern rock. With late frontman and guitarist Toy Caldwell and his innovative approach to guitar playing – Caldwell picked everything with his fingers, even solos! – The Marshall Tucker Band made its way into legend, inspiring countless bands in the process.

Rickey Medlocke may be rocking stages across the world with Lynyrd Skynyrd, but for years he could be found fronting Jacksonville Southern rock act Blackfoot, pulling double duty on guitar and vocals. Founded in 1969, Blackfoot followed in the same vein as Lynyrd Skynyrd, with powerful lead guitar parts entwined with soaring vocals from Medlocke and an impossibly tight rhythm section that created classics like “Highway Song” and “Train Train”. These days Blackfoot is still active, but these days Rickey is rocking a different title within the band – producer.

Our list wouldn’t be complete without our other favorite Van Zant brother and his band, the ever classic 38 Special!  With hits like “Hold On Loosely” and our personal favorite “Caught Up In You,” 38 Special formed in 1974 and was influenced by Southern rock giants the Allman Brothers Band and Lynyrd Skynyrd, whose lead singer Ronnie was the older brother of 38 Special vocalist Donnie Van Zant. Though Donnie retired in 2013, the band continues on in 2016 and we can’t wait to see what the future has in store for these Southern rock legends.

Haw, haw, haw, haw! These bearded Texan rockers have kept us singing and dancing since the very first moment they burst onto the scene in 1971! Known for hit songs like “La Grange” and boasting a talented lineup featuring Billy Gibbons, Dusty Hill and the beardless Frank Beard, ZZTop is iconic for their magnetic stage presence and gritty, no-holds-barred approach to rock and roll.

Jacksonville’s Allman Brothers Band was one of the guiding forces of Southern rock, completely changing the landscape of rock music with their bluesy, soulful approach to rock and roll that was equal parts country, Motown, and hard rock. With a lineup that boasted the talents of brothers Gregg and Duane Allman, Butch Trucks, Berry Oakley, Dickey Betts and the irreplaceable J’aimoe, the Allman Brothers Band held us captive with songs like “Whipping Post” and “Midnight Rider” and never let go, influencing everyone from Lynyrd Skynyrd to Kentucky rock band Black Stone Cherry.

The undisputed kings of Southern rock and 10-year veterans of the Rock And Roll Hall Of Fame, Jacksonville natives Lynyrd Skynyrd have come to define Southern rock not just as a genre, but a way of life. Having shown incredible strength in the face of unspeakable tragedy, Lynyrd Skynyrd returned to the spotlight in 1987 with Johnny Van Zant at the helm and have been rocking stages around the world ever since – and in a world gone mad, their brand of rock and roll mixed with Southern values is needed now more than ever!