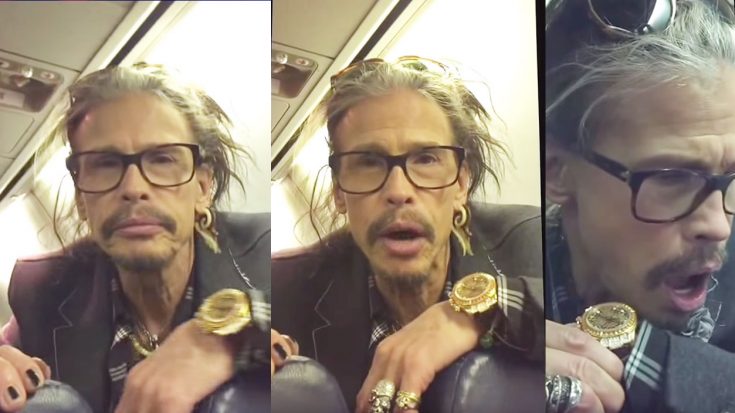 Could This Get Any Better For Her?

No one really enjoys flying – it’s a whole lot of rushing, stressing making your flight on time with new TSA regulations and security checkpoints and hoping your seatmate doesn’t smell like garlic or listen to whale calls a little too loudly on their iPod and when you throw kids into the mix, flying can be a parent’s worst nightmare. However, one mom can attest to the fact that with the right people on your flight, the experience can not only be pleasurable, but one of the single coolest moments of your life.

While on a Southwest Airlines flight last year with her 7 year old Carly, YouTuber and Aerosmith fan Christa was surprised to see that the man sitting in the row of seats directly in front of hers was none other than Aerosmith frontman Steven Tyler, and worked up the courage to start up a conversation and ask the singer if he’d be kind enough to sing “Happy Birthday” to her daughter, thinking he’d either say no or sing it and leave it at that. Imagine her surprise, then, when Steven actually grabbed her iPhone and filmed himself singing “Happy Birthday” to little Carly, blowing kisses and complimenting her on her super cool, hot pink glittery birthday girl skirt!

As far as rockstar moments go, this is one of our favorites because of Steven’s massive heart and the genuine love he has for his fans, great and small; Carly may have had no idea who Steven was before she boarded that flight with her mom, but she sure left it as one of Steven’s biggest little fans!

Besides, Steven has proven time and again that he’s that one cool guy who’s always happy to do something nice for his fans. We’re listing this down as yet another reason to love him.