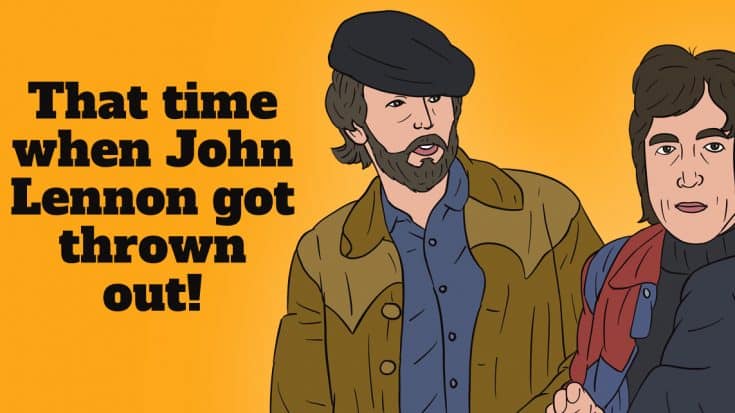 The year was 1974 and John Lennon was behaving, well, like a typical rockstar. At a time when there was no internet or social media, news traveled fast about Lennon’s misdemeanors such as the time he wore a sanitary napkin around his head while watching a performance seated on the dais. And just when it seemed like that was all he planned to do, he attended a Smothers Brothers Show on March 12, 1974 along with other celebrities like Paul Newman, Joanne Woodward, Helen Reddy, Cliff Robertson and Lily Tomlin.

Along with then-girlfriend May Pang, his other companion was Harry Nilsson. And something nobody would have expected from a former Beatle, Lennon began shouting obscenities to the Smother Brothers while other members of the audience shouted back at him to keep quiet.

But since Lennon showed no signs of stopping his antics, Smothers Brothers’ manager Ken Fritz was left with no choice but to ask him to leave. But that wasn’t the end of it. Lennon, instead of leaving without a fuss, took a swing at Fritz but fortunately missed. On instinct, Fritz hit back. After which, Lennon took a glass to throw to Fritz. He missed again but ended up hitting a waitress.

Bouncers then arrived and took Lennon out of the Troubadour nightclub – it got so physical that he even lost his trademark glasses. Not leaving without a fight, Lennon knocked off tables and while almost at the door, a 51-year-old matron tried taking his photograph. But according to her, Lennon hit her and so she filed a battery suit against him. Nilsson was not directly involved but those who were near their tables claimed that it was him who encouraged Lennon’s behavior.

Apparently, the cause of all the chaos was one brandy Alexander cocktail that Nilsson introduced to Lennon.

The Smothers Brothers didn’t take it so badly though as they said, “It was a big Hollywood opening. During our first set, I heard someone yelling about pigs…it was fairly disgusting. I couldn’t figure out who it was. But I knew Harry and John were there. The heckling got so bad that our show was going downhill rapidly. No one cared, because it was just a happening anyway, but there was a scuffle going on and we stopped the show. Flowers came the next day apologizing.”

Lennon recalled the incident in 1975 on the Old Grey Whistle Test, “I got drunk and shouted…it was my first night on Brandy Alexanders, that’s brandy and milk, folks. I was with Harry Nilsson, who didn’t get as much coverage as me…the bum. He encouraged me. I usually have someone there who says ‘okay Lennon, shut up.’ There was some girl who claimed that I hit her, but I didn’t hit her at all, you know. She just wanted some money and I had to pay her off, because I thought it would harm my immigration.”

He also said, “There was some girl who claimed that I hit her, but I didn’t hit her at all, you know. She just wanted some money and I had to pay her off, because I thought it would harm my immigration. So I was drunk. When it’s Errol Flynn, the showbiz writers say: ‘Those were the days, when men were men.’ When I do it, I’m a bum. So it was a mistake, but hell, I’m human.”