The Story of Elton John and Eminem’s Unlikely Friendship 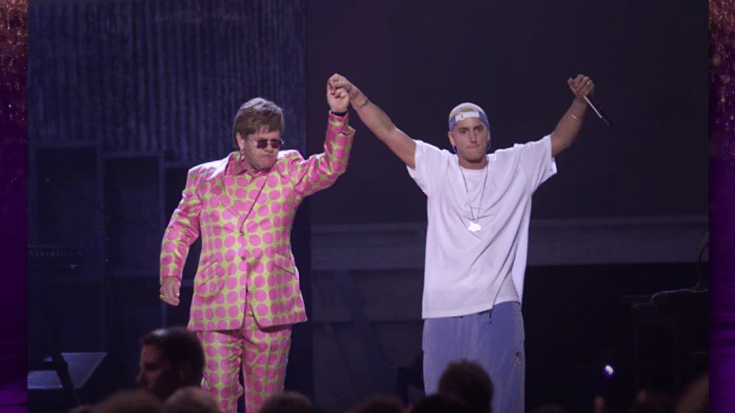 Through Thick and Thin

Grammy Awards are almost always controversial. But on February 21, 2001, the name on everyone’s lips was Eminem. He received four nominations for his third studio album, “The Marshall Mathers LP.” It was a massive hit but several people pointed out his violent, misogynistic, and sometimes homophobic lyrics. And perhaps it’s because of that that nobody foresaw his musical collaboration during his performance that night.

There were protestors outside the venue and pretty much everyone watching the event was surprised to see who joined Eminem on stage – the classic rock veteran and member of the LGBTQ community, Elton John. He stepped in for folk singer Dido, played the piano, and sang her lines to “Stan.” They ended the number with a hug before Eminem flipped off the audience. Typical.

And let’s just say, viewers didn’t know what to make of it.

Eminem later explained to MTV, “I didn’t know he was gay. I didn’t know anything about his personal life. I didn’t really care. But being that he was gay and he had my back, I think it made a statement in itself saying that he understood where I was coming from.”

And apparently, Elton John has been his supporter from day one. They have been close friends for two decades now which says a lot because Eminem’s known for having more enemies than friends in the industry.

In a 2010 interview with Rolling Stone, John said: “I love him. I don’t see much of Marshall, but we speak a lot. He’s really worked very hard at [sobriety], and it’s changed him so much. I just saw a picture of him in a magazine, and he looks like a 17-year-old boy. I’m so happy for him . . . We have such a laugh. We call each other cunts. I ask him how he’s doing and tell him how proud I am of him. He’s got a great sense of humor. When David and I had our civil partnership, he sent us a present. In a case, on velvet cushions, were two diamond cock rings. So there’s a homophobe for you.”

And Eminem discussed with Guardian how John helped him, “When I first wanted to get sober, I called [Elton] and spoke to him about it. He’s somebody who’s in the business and can identify and relate to the lifestyle and how hectic things can be. He understands…the pressure and any other reasons that you want to come up with for doing drugs. I reached out to him and told him, ‘Look, I’m going through a problem and I need your advice.'”

When John appeared on The Graham Norton Show in 2017, he recalled their much-talked about collaboration: “He was accused of being homophobic by so many people because of his lyrics which I thought was nonsense. I came out and supported the fact that he isn’t.”

He again set the record straight to Beats 1 host Zane Lowe, “For me, Eminem was never homophobic. I listened to the whole of the Marshall Mathers album when I drove to a show in South Hampton and I was floored by it. And I thought how could anyone think this is…he’s just writing about the way things are. Not how he thinks, but the way things are.”

Earlier this year, Eminem gave a surprise performance at the Oscars ceremony in Los Angeles. After the event, the rapper posted a photo on Twitter of him and “Uncle Elton” who bagged the Best Original Song for “I’m Gonna Love Me Again” from his 2019 biopic Rocketman.

I got to see my Uncle Elton tonight at the Oscars. Congrats on your win too, Sir! @eltonofficial pic.twitter.com/9HsQHvGzM4

And being close friends, they’re not above telling each other when one has gone too far especially since Eminem’s known for his diss tracks and not holding back with his words. On Eminem’s 2018 album Kamikaze, a song titled “Fall” called Tyler the Creator f****t. He later apologized about the slur and admitted, “In my quest to hurt him, I realise that I was hurting a lot of other people by saying it. At the time I was so mad… it was one of the things that I kept going back to and going ‘I don’t feel right with this.'”

When John interviewed Eminem for Apple Music’s Rocket Hour, the rocker said: “You’re still as feisty as you ever were which I love. I do like a little bit of feistiness. I’m very happy that you said you don’t get to use the word f****t anymore because I think you don’t need… you’re bigger than that.I’m glad you said that and cleared that up and that’s great kudos to you for that. Well done. And you know, you’ve had your little moments towards Machine Gun Kelly and you put out the diss track ‘Kill Shot’, which I love, by the way.”

It’s a lovely tale of unlikely friendship between two artists who are deemed titans in their respective genres.

Elton John told Eminem, “Your sobriety day is in my diary. I’m so proud of you. I’m 27 years clean, and when you get clean, you see things in a different way. It makes your life so much more manageable. It seems to have made all the difference — I can tell when I speak to you.”