The Story Behind “She Loves You” By The Beatles 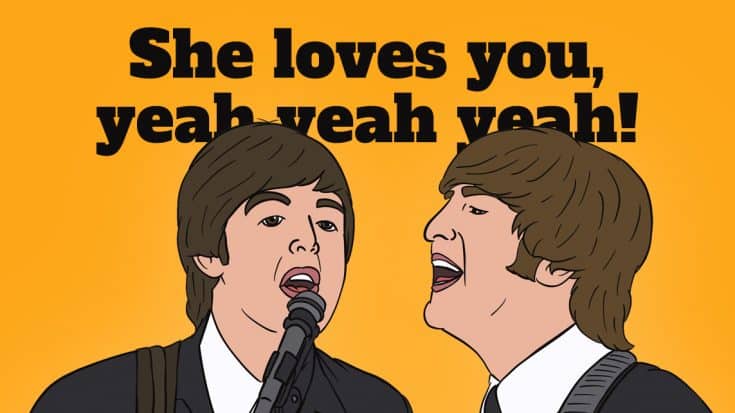 “She Loves You” is The Beatles’ best-selling single in the United Kingdom. John Lennon and Paul McCartney began working on the song on June 26, 1963 while in the Turk’s Hotel in Newcastle upon Tyne just before The Beatles’ second performance at the Majestic Ballroom. They eventually finished the track at McCartney’s family home in Forthlin Road, Liverpool.

Lennon said, “I remember it was Paul’s idea: instead of singing ‘I love you’ again, we’d have a third party. That kind of little detail is apparently in his work now where he will write a story about someone and I’m more inclined to just write about myself.”

McCartney’s original idea of a call-and-response pattern was inspired by Bobby Rydell’s “Forget Him”. He recalled, “And, as often happens, you think of one song when you write another. We were in a van up in Newcastle. I’d planned an ‘answering song’ where a couple of us would sing ‘She loves you…’ and the other one answers, ‘Yeah, yeah.’ We decided that that was a crummy idea as it was, but at least we then had the idea for a song called ‘She Loves You’. So we sat in the hotel bedroom for a few hours and wrote it.”

After completing the song, they asked McCartney’s father to listen to it. After playing it to him, his dad commented: “That’s very nice, son, but there’s enough of these Americanisms around. Couldn’t you sing, “She loves you. Yes! Yes! Yes!”” To which, the pair roared with laughter.

Just five days later, The Beatles recorded “She Loves You” at a five-hour session in Abbey Road’s studio two.

Speaking about its meaning, McCartney shared: “It was again a she, you, me, I, personal preposition song. I suppose the most interesting thing about it was that it was a message song, it was someone bringing a message. It wasn’t us any more, it was moving off the ‘I love you, girl’ or ‘Love me do’, it was a third person, which was a shift away. ‘I saw her, and she said to me, to tell you, that she loves you, so there’s a little distance we managed to put in it which was quite interesting.”

“She Loves You” served as their breakthrough single and helped propel them into global superstardom.