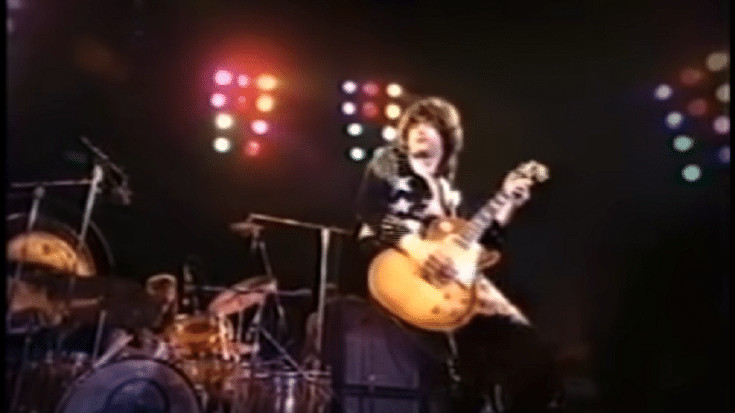 A League of Its Own

Led Zeppelin’s second album kicked off with the tour de force “Whole Lotta Love”. This revolutionary and groundbreaking track became their first hit single in the US and was certified gold a few months after its release. It’s a song which was way ahead of its time and it became a benchmark in hard rock.

The guitar hook at the beginning is one of the most easily recognizable riffs in rock. Jimmy Page came up with it in 1968 while on his houseboat on the River Thames in England. Although, John Paul Jones once claimed that Page got the idea at a stage improvisation as the band played “Dazed and Confused.”

Page denied that though and told Marc Myers in an interview (which he included in his book “Anatomy of a Song: The Oral History of 45 Iconic Hits That Changed Rock, R&B, and Pop”), “I suppose my early love for big intros by rockabilly guitarists was an inspiration, but as soon as I developed the riff, I knew it was strong enough to drive the entire song, not just open it. When I played the riff for the band in my living room several weeks later during rehearsals for our first album, the excitement was immediate and collective. We felt the riff was addictive, like a forbidden thing.”

He added, “I had this avant-garde master plan for “Whole Lotta Love” and could hear the construction coming together in my head. From the start, I didn’t want “Whole Lotta Love” — or any of our songs — to be a single. I had been a session musician since the early 1960s, as had [bassist] John Paul Jones. We had recorded on hundreds of singles and hated the abbreviated, canned format. I also knew that stereo FM radio was emerging in America and playing albums. I wanted to develop our songs emotionally, beyond just lengthy solos.”

Page also didn’t want their album to “be chopped up into singles for AM radio.” It was a good thing that he and JPJ knew their way in the recording studio.

He continued, “During the band’s rehearsals in early ’69 for our second album, “Whole Lotta Love” sounded strong enough to open it, so I wanted to record the song first. In April, we went into London’s Olympic Studios and cut “Whole Lotta Love” with engineer George Chkiantz, who had recorded Jimi Hendrix there.”

Page knew what he wanted and so they ended up experimenting and in the process, broke new grounds as well.

He told Guitar World, “During the mix, with the aid of engineer Eddie Kramer, we did all the panning and added the effects, including using Low Frequency Oscillators on the tape machine to really pull the whole thing down and lift it back up so the sound is moving in rhythm.

“It was something no one had ever done before in that context, let alone in the middle of a song. That’s how forward thinking we were, that’s how avant-garde it was, and that’s how much fun we were having.”

Everything had to be done right especially with John Bonham’s part. Page said, “For the song to work as this panoramic audio experience, I needed Bonzo [drummer John Bonham] to really stand out, so that every stick stroke sounded clear and you could really feel them. If the drums were recorded just right, we could lay in everything else.”