The Life Of Stevie Nicks At 28 Years Old 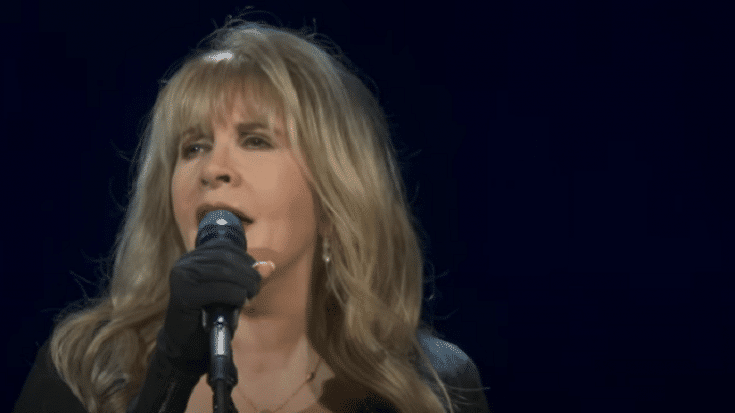 It was in 1967 when Stevie Nicks began her career in music but it wasn’t until 1975 when she’d finally get the break the been working for after joining Fleetwood Mac with then-boyfriend Lindsey Buckingham. And at 28 years old, stars aligned and she was on top of the world.

In a new interview with Bustle for their Q&A series 28, Nicks admits that she “probably have the best 28 story of anybody that you will interview.”

She recalls meeting Mick Fleetwood before joining his band, “We met [the band] on January 1st, 1975 at a really great Mexican restaurant in Hollywood. We were standing out in front waiting when they drove up in these really old white Cadillacs that had those big fins in the back, so they were kind of spectacular. They all got out and they’re very English and Lindsey and I are California hippies. So we went and had dinner and we knew it from that one night of sitting around and eating fantastic Mexican food together that everything was going to be alright.”

A few months later, Stevie Nicks proved just how much of a game-changer she was to Fleetwood Mac when she penned what would become a classic hit – “Rhiannon”. From recording and shooting the LP cover to press tours and a summer trek, Nicks looks back at those busy months and says: “It was like when you have a feeling in your bones that something is truly magical and great, and it was.”

Instead of getting overwhelmed by their success, she felt humbled instead. She adds, “[There] are million-dollar stories about when you first join a band that becomes like a speeding bullet. You feel like you’re in a car with your head hanging out of it and your hair is just being blown back so hard that your head’s almost being blown off your body. That’s how it was [at the beginning of my] 28th year.”

But it wasn’t pure luck because Nicks and Buckingham worked hard to land the gig. They went from being penniless to almost-millionaires. She remembers, “I cleaned our producer’s house twice a week and he paid me $250 a month, which paid our rent on a really cool little Spanish apartment [in Los Angeles]. Then later that year we got back from [our first] tour and we signed serious contracts, making Lindsey and I each one-fifth of the band. Together we were almost a millionaire. So we went from never having to file taxes — because we didn’t make enough money to file taxes — to having to hire a business firm because we had way too much money. Thank you to my mother who said to me, “Honey, you guys need to find out who’s the best business management firm in Los Angeles and hire them.” Because we were just taking the money and putting it under a mattress. We had so much money we didn’t know where to hide it.”

And because she suddenly had more money than she ever dreamed, she bought something to mark that moment in her life – a red Jaguar even though she hardly drove around. And the funny thing is, when she and her friends went inside the dealership, the salesperson told her outright that she couldn’t possibly afford it. But of course, she got it in the end.

Nicks describes being a rockstar as “fun” and “cool.” But it was just the beginning because she was also just 28 years old when she began working on Fleetwood Mac’s magnum opus “Rumours”.

They rented two apartments just 10 minutes away from The Record Plant in Sausalito. It was during this time when she reached her creative peak with the musical masterpiece “Dreams”.

She says, “I [remember] walking into the studio up in Sausalito with “Dreams.” I said, “I have something I think you guys are going to want to hear.” Everybody was like, “What is it now? Have you written another song out of your millions of songs?” And I was like, “Yes I have, but listen to this.” So they put it on and it was just me playing a little Fender Rhodes electric piano and singing on a cassette player, but they put it on the big speakers and the song started playing. We ended up recording it that night.”

But like in everything else, Nicks also had the occasional lows and it came in the form of relationship troubles with Buckingham. They’ve been together for around six years and were “more-or-less married.”

In the end, Nicks doesn’t regret anything. She concludes, “Everything that was done was meant to be done in order for us to be sitting here today with the life that we have.”