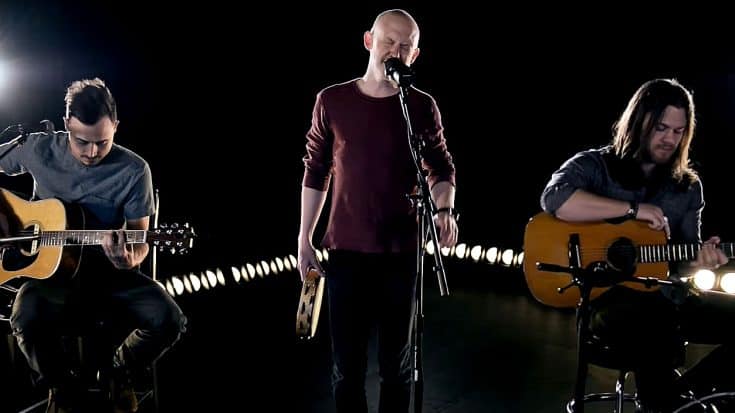 Released on October 15, 2013 as the lead single from their long awaited fourth studio album Helios, The Fray’s “Love Don’t Die” signaled a significant departure from their softer, piano-driven brand of rock music and marked a key turning point in the sonic evolution of Colorado’s favorite sons. A lively, uptempo track laced with jangly guitars and driving rhythms tied together beautifully by gritty vocals and a message of undying affection, “Love Don’t Die” finds The Fray toying with Southern rock elements and a little blues to round out the mix, the sheer magic of the Colorado based rockers never more apparent than when “Love Don’t Die” received the acoustic royal treatment for The Fray’s 2014 Billboard Studio performance.

Fun Fact: The music video for “Love Don’t Die” was heavily inspired by a scene from The Blues Brothers in which similar events – a rowdy bar room brawl –  take place.

Armed with only a pair of acoustic guitars, a tambourine and a kick drum, The Fray’s Isaac Slade, Joe King, and Dave Welsh converged on the tiny studio with the promise of another electrifying performance on the horizon and boy – did they ever deliver! Supported by Joe King and his crystalline backing harmony, Fray frontman Isaac Slade serves up a winning vocal performance punctuated by rapid fire shakes of his tambourine, rounded out beautifully by Dave Welsh pulling double duty on guitar and kick drum, keeping both the beat and his bandmates nailed down tight for one seriously stellar performance.

Where other bands follow, The Fray lead fearlessly and after watching this video, we’d follow them anywhere. Enjoy!