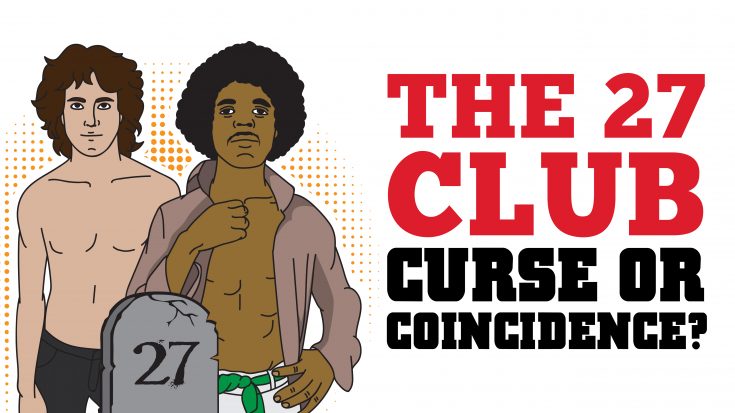 Celebrity deaths are always sad. Dying young is even more tragic, and apparently a mysterious statistical anomaly among rock stars. The concept for the notorious “27 Club” came to haunt the public consciousness in the 1970’s when rock stars Brian Johnson, Jimi Hendrix, Alan Wilson, Janis Joplin, and Jim Morrison tragically died within the space of three years – all at the tender age of 27.

When Kurt Cobain committed suicide when he was also 27 years old, it was his mother who acknowledged the connection of the infamous death club following her son’s demise saying

Since Cobain’s death, questions have surfaced on whether the age of 27 is a curse for rock stars, or just an unfortunate coincidence.

Here are 10 rock stars who coincidentally (or mysteriously) died at age 27.

Source: guitarworld.com
One of the earliest members of the “27 Club”, ragtime blues guitarist and singer-songwriter Robert Johnson has a haunting myth surrounding his untimely death. The real cause of his death is declared “unknown” but there are several theories about it. One theory claims that Johnson was murdered by a jealous husband who poisoned his whisky after the blues singer flirted with his wife at country dance. Witnesses stated that Johnson began feeling ill within a course of three days and eventually died in a state of severe pain.

However, there is a popular legend which claims that his song “Crossroads Blues” speaks of the singer’s encounter with the devil at a cross roads where he is said to have sold his soul. The legend tells the story of Johnson taking his guitar to a crossroad by the Dockery Plantation in Mississippi where he was met by a large black man (the devil) who gave him the musical ability to become famous and successful in exchange for his soul, which the devil claimed when the King of the Delta Blues  was 27 years old.

Source: dennishopper.comA little known fact about The Rolling Stones may be that it wasn’t front man Mick Jagger who formed the iconic rock band. It was English musician, Brian Jones. The band’s bassist Bill Wyman said about Jones:

Unfortunately due to Jones’ continues drug abuse which affected his relations with the other members, he was fired from the band in June 1969. It was barely a month after that he was found dead at the bottom of his swimming pool, having apparently drowned while intoxicated from alcohol and drugs. The coroner’s official report declared that Jones had a “death by misadventure”.

Ironically, fellow rock artist Jimi Hendrix publicly dedicated a song to Jones, while The Doors lead singer Jim Morrison published a poem titled “Ode to L.A. While Thinking of Brian Jones, Deceased”. Hendrix and Morrison are also part of the “27 Club”, both died within the following two years after Jones’ death.

Source: keepingthebluesalive.com
One of the precursory artists to begin the streak of rock musicians’ consecutive deaths at 27 in the 1970s, Canned Heat lead singer Alan “Blind Owl” Wilson was found dead on a hillside near his bandmate Bob Hite’s home in Topanga Canyon, California.  Autopsy reports identified “acute barbiturate intoxication” as his cause of death. Months prior his body was found, Wilson unsuccessfully attempted suicide by driving his car off of a freeway. He was hospitalized after the accident and was also checked in for depression. He was released only after a few weeks.

With his death involving an overdose on drugs, it was never clarified whether it was accidental or suicide with the reason being that he left no note indicating so.

Only a year after his friend Brian Jones’ tragic end, and just two weeks after Alan Wilson died,  legendary rock guitarist Jimi Hendrix also met his death the same age as Jones and Wilson – 27. Hendrix’s death also has a lot of speculation surrounding it, disputing whether it was a suicide or an accident. He was found dead in his London apartment by his girlfriend Monika Dannemann. The cause of death stated in his obituary states asphyxiation after choking on his own vomit due to barbiturate intoxication. Hendrix was found to have overdosed on Dannemann’s Vesparax sleeping pills. The drug ingestion was followed by getting drunk on wine with his girlfriend the night before. Many speculators think Hendrix’s death may have been a suicide after discovering the poem he wrote the night before his death titled “The Story of Life”. The chilling last stanza of Hendrix’s final poem reads:

The story of life is quicker than the wink of an eye.

The story of love is hello and goodbye.

Until we meet again.

It’s tragedy upon tragedy in the world of rock music when female rock legend Janis Joplin was found dead in her Hollywood hotel room only 16 days after Jimi Hendrix’s death.

Full Tilt Boogie road manager John Cooke found the singer dead on her hotel room floor. Cooke drove to Joplin’s hotel room after producer Paul Rothchild informed him that Joplin failed to show up for her recording session. Joplin’s official cause of death was heroin overdose compounded by alcohol.

Prior to her death, Joplin was set to meet up with her fiancé Seth Morgan and her former lover Peggy Caserta on October 2. When they both failed to show up to keep her company, Joplin was said to have been significantly saddened as she instructed the hotel front desk clerk to hold off all  her calls thereafter. It was said that this event of depression lead her to overdose on potent heroin.

Exactly 2 years after his friend Brian Jones was found dead in a swimming pool, The Doors lead singer Jim Morrison was ironically found dead in almost the same way, on the same day, and the same age as Jones. Morrison’s girlfriend Pamela Courson found his lifeless body on the morning of July 3, 1971 inside the bathtub of his Paris apartment. Sans autopsy, the coroner released the singer’s official cause of death to be heart failure do to heroin overdose combined with alcohol ingestion.

The night before his death, Morrison was reported to have vomited blood before getting into a bath, of which he never got out of.

In another ironic turn of events, girlfriend Pamela Courson also died of heroin overdose three years after Morrison, at guess what age…yes, also 27.

Ron “Pigpen” McKernan’s tragic fate is a twisted irony connected to the name of his band The Grateful Dead which he himself came up with. The proficient blues organ and harmonica player was a heavy alcoholic as much as he was a heavyweight in the world of blues rock.

While his other band mates turned to psychedelic drugs, McKernan did not. Instead, he abused alcohol, which lead to his severe liver problems at a very young age of 24. His damaged liver eventually got in the way of his career when he was forced to pull out of touring in 1970 due to his ill health. He later recovered enough to reunite with his band in 1971 until 1972. His last performance was a Grateful Dead concert at the Hollywood Bowl in June of 1972.

His body finally gave in when he died of internal hemorrhaging caused by alcohol abuse in 1973.

They could’ve been the next Beatles. 1970s rock band Badfinger, enjoyed a steady rise in the industry but suffered a very painful downfall. Badfinger’s lead singer and guitarist, Pete Ham, was not able to handle the crash of his band and career when he took his own life by hanging himself in the garage of his home in Surrey, England. Due to conflicts between Ham and The Beatles’ label Apple Records, Badfinger ended up on a sour end of a rock n roll deal when they were not able to release an album or tour.

The downward spiral continued with countless internal and financial woes, and feuds with the band’s business manager Stan Polley. Ham mentioned Polley in his suicide note saying “I will take him with me.”

Pete Ham died just three days shy of his 28th birthday, leaving a pregnant girlfriend who gave birth to their daughter just one month after his death.

Before being the 3rd bassist for the English progressive hard rock band Uriah Heep, Gary Thain served as a bassist and guitarist for the Keef Hartley Band, who opened for Uriah Heep in 1971, until they broke up in 1972. In 1975, Thain met his demise at 27 due to an overdose of heroin.

His drug addiction came strangely after he was electrocuted on stage while his band was playing at a concert in Dallas, Texas. After his freak accident, he developed various health problems that were apparently side effects of being electrocuted. He then turned to abusing drugs to cope with his health issues. He was let go from Uriah Heep only months before he was found dead in his England apartment in December of 1975. His official cause of death was respiratory failure due to heroin overdose.

Perhaps the most popular hall of famer in the “27 Club”, Nirvana front man Kurt Cobain died of a self-inflicted gun-shot wound to his head. Cobain’s tragic suicide reawakened the curiosity and fascination surrounding the frequent similarity of rock stars meeting their deaths at the age of 27. Cobain, who was dubbed the “King of Grunge”, struggled with his fame, his public persona, and heroin addiction as he battled depression during the peak of his band’s career. His drug abuse led to various chronic illnesses that resulted to frequent trips to the hospital while he was on tour.

Days before an electrician found him dead in his Seattle home, Cobain escaped from a drug rehabilitation facility in Los Angeles by climbing up a six-foot tall fence and taking a taxi to the airport. His hospital tag was still on his arm when his body was found. A suicide note addressed to his childhood imaginary friend “Boddah” was found beside his body along with bottles of alcohol and traces of heroin. His note ended with a message to his wife Courtney Love and 2-year old daughter Frances Bean saying,

For her life, which will be so much happier without me.