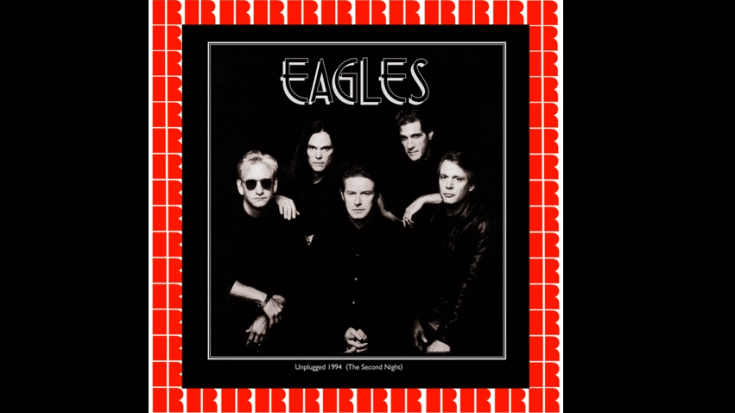 One of the greatest rock acts to come out of the ’70s, The Eagles had a string of hits that turned them into global superstars. They have sold over 100 million records in the US alone. Although their first four albums spawned some classic hits, it wasn’t until the release of their magnum opus “Hotel California” when they reached their peak. But even way past their glory days, they’re still performing at sold-out shows.

They were supposed to embark on a trek this year performing “Hotel California” in its entirety but as the pandemic ground the touring industry to a halt, they were forced to reschedule the dates to 2021. So to celebrate this legendary band, here are their ten best songs.

One of their best known songs, it was written by Jack Tempchin who used to hang out with Jackson Browne, Glenn Frey, and J.D. Souther. When Frey heard him play “Peaceful Easy Feeling,” he told Tempchin about his newly formed band which backed Linda Ronstadt. And when he came back and gave Tempchin a demo, Tempchin was nothing short of impressed. Tempchin thought, “It was so good I couldn’t believe it.”

It’s the first song they finished for their 1979 album “The Long Run”. It’s also their first track to feature Timothy B. Schmit taking over the lead vocal duties. It was Schmit who came up with the title and created the foundation of “I Can’t Tell You Why.” Don Henley and Frey helped finished it. It had an R&B feel because Frey grew up listening to R&B music.

Their first single to top the US Billboard Hot 100, it may be a popular wedding song but it’s actually about breakup. Frey explained, “I was playing acoustic guitar one afternoon in Laurel Canyon, and I was trying to figure out a tuning that Joni Mitchell had shown me a couple of days earlier. I got lost and ended up with the guitar tuning for what would later turn out to be ‘The Best of My Love.'”

It was mainly written by Frey but with some help from Don Henley. Aside from peaking at #2 on the US Billboard Hot 100, it also crossed over to country charts which was quite an achievement for rock bands back then. The song’s origins can be traced back to when they were still struggling musicians and while they were hanging out at a bar, they saw a beautiful young lady with a much older but obviously wealthy man. While looking at the couple, Frey remarked: “Look at her, she can’t even hide those lyin eyes!”

6. One of These Nights

The Eagles wanted something that’s neither country rock nor ballad. Drawing inspiration from R&B and disco, Don Henley took the microphone because according to Frey, they “wanted ‘One of These Nights’ to have a lot of teeth, a lot of bite—a nasty track with pretty vocals.” It was a hit not just in the US but in several other countries as well.

5. Life in The Fast Lane

Known for its iconic guitar riff, they came up with the song while Frey was riding with a drug dealer and on their way to a poker game. They were speeding and the dealer just said, “Life in the fast lane” which Frey immediately thought was a great song title. Frey told BBC in 1981, “Life In The Fast Lane’ kind of expressed the stereotyped LA ‘run around in your Porsche’ 24 hour boogie mode that unfortunately is too true for a lot of people. It wasn’t really a statement about the guys in the band, or about anybody in particular – just it’s kind of disturbing to see the extremes that the bourgeois jet set will involve themselves in. For instance, disco almost turned into a lifestyle, and it’s such a non-meaningful thing on which to base one’s life.”

It’s a unique track in their canon because it’s bassist Randy Meisner who’s on lead vocals. It became a crowd favorite and Frey would often insist that they perform it for the fans during their concerts but Meisner could not always sing the high note live out of nervousness. They would argue whether or not to include it on their setlist. Eventually, it became one of the reasons why Meisner left the group.

One of The Eagles’ signature songs, Jackson Browne began writing it but had a hard time finishing the track. Fortunately, his upstairs neighbor was Glenn Frey who assisted him in completing it. The Eagles recorded “Take It Easy” and it was released as their debut single. It was a hit. Browne recalled, “He [Frey] finished it in spectacular fashion. And, what’s more, arranged it in a way that was far superior to what I had written.”

“Desperado” developed from a song Henley started working on back in 1968. For his first songwriting session with Frey, he presented the unfinished track and it didn’t take long for Frey to jump in and complete it. A staple in classic rock radio stations, Linda Ronstadt recorded her version for her fourth studio album. It’s interesting because Frey and Henley toured with her as part of her backing band and even played on her self-titled LP.

“Hotel California” can only be described as a masterpiece. It’s the song that helped cement their rockstar status. They achieved massive success with the single. There were a few controversies regarding its definitive meaning which further added to its popularity.