That Time David Lee Roth Surprised A Halftime Show In 1986 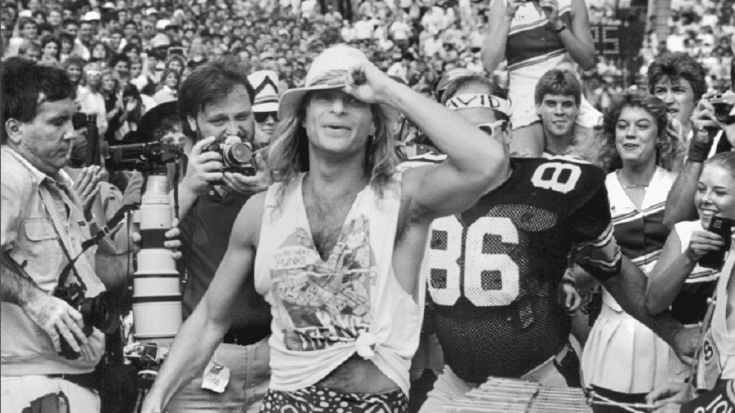 On September 13, 1986 in the annual football game between the University of Iowa and Iowa State at Kinnick Stadium in Iowa City, fans were treated to a surprise visit by none other than legendary rocker and former Van Halen frontman David Lee Roth. He was in Iowa for a pair of shows at the Hilton Coliseum in Ames and Five Seasons Center in Cedar Rapids.

During the halftime show, the marching band was playing when Diamond Dave himself came out into the field. In typical Roth fashion, he’s a big ball of energy – waving his arms to the crowd, conducting the band, running around, and even doing a “Bump and Grind” with an Iowa State flag girl named Laura Uhl.

Uhl told the Roth Army Twitter account (via Van Halen News Desk): “Our band had practiced the music and visual to one of his songs (“Yankee Rose”)… I personally did not know he would be appearing at halftime until just before the game. Our drum majors told us he might do something crazy, so just keep on performing no matter what. I should have turned around and played it up!”

Check out the clip and some of the photos below.

Today back in 1986: @DavidLeeRoth performs with the marching band during halftime of the @HawkeyeFootball @IowaStateFB game at Kinnick Stadium.

Incidentally, this is one of my holy grail videos to find. Surely someone connected with marching band filmed DLR. @kinnickstadium pic.twitter.com/KSOVqajkiE