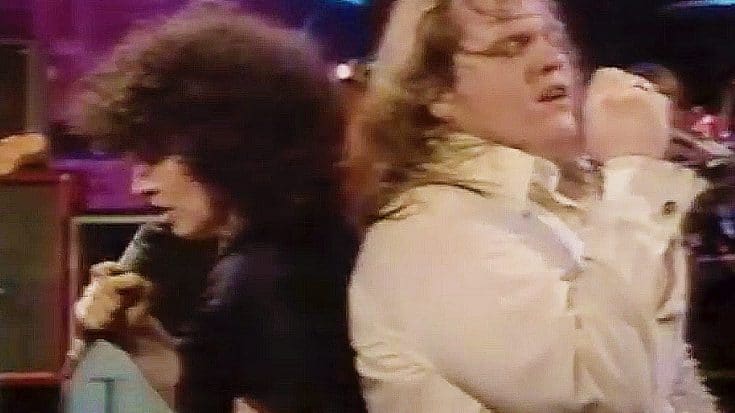 In January 1978, multi-platinum selling artist Meat Loaf was featured on The Old Grey Whistle Test in celebration of his new album, Bat Out Of Hell. Performing the iconic title track “Bat Out Of Hell”, Meat Loaf is later joined by special guest Karla DeVito for an explosive performance of “Paradise By The Dashboard Light”, a romantic epic told in three parts.

Parts one, two, and three follow the two when they first find themselves in the heat of the moment, ready to ‘go all the way tonight’. It’s only when Karla pulls back from Meat Loaf’s advances and asks for assurance of his commitment to her that Meat Loaf finds himself unsure of the whole situation. After Karla poses the question ‘will you love me forever?’ Meat Loaf can only respond with ‘let me sleep on it’.

Fun Fact: Featured on 1977’s Bat Out Of Hell, “Paradise by the Dashboard Light” showcased the vocal talents of singer Ellen Foley. For the music video and live performances, however, Meat Loaf enlisted the talents of Karla DeVito.

Fast forward to present day – the two can’t stand each other. Rather than break the vow they made to each other, they are both ‘praying for the end of time’.

Meat Loaf and Karla sing parts two and three as well as incorporate vocal improv to deliver a passionate performance of “Paradise By The Dashboard Light”. The chemistry between Meat Loaf and Karla is undeniable as their love story spirals out of control, trading insults back and forth before something Karla says stops Meat Loaf dead in his tracks. It’s impossible to tear your eyes away as the drama unfolds – relive it all from start to finish here!