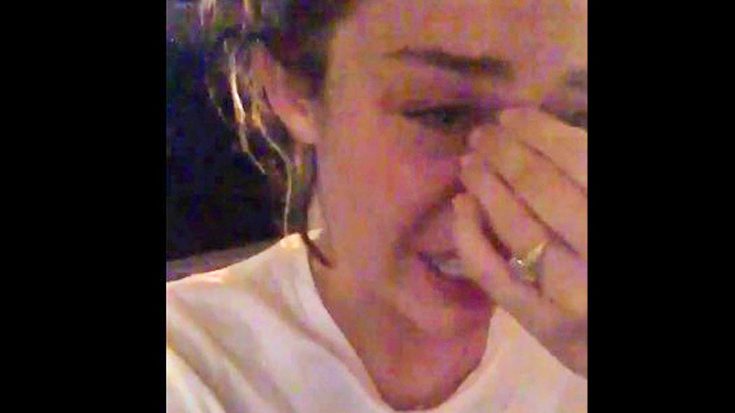 Well y’all, it’s finally over. After one of the most grueling, bruising presidential campaigns in modern history, Donald Trump emerged victorious last night as he trounced Democratic candidate Hillary Clinton in a stunning election night upset, clinching 279 electoral votes to become the 45th President of the United States.

This morning we awoke to a brand new day – one in which we can put aside the angry words and reach out across the aisles to do the work needed to unite a nation deeply divided and while not everyone was exactly thrilled with Trump’s astonishing win last night, there’s one person who was absolutely devastated and made it known: Miley Cyrus.

Cyrus, 23, raised eyebrows earlier this year when she called Donald Trump “a f—ing nightmare” and vowed to move to Canada if he won the election. Last night, the former Hannah Montana star and daughter to country star Billy Ray Cyrus appeared in a video on Twitter, crying and heartbroken beyond belief at Hillary Clinton’s loss to Donald Trump but ultimately “accepting” both Trump as a person and as our new president.

The video, posted to Twitter last night has since been liked over 70,000 times and retweeted 36,000 times and is currently one of the most talked about topics across the internet today. Check it out in the video below and let us know: was this the reaction you expected?