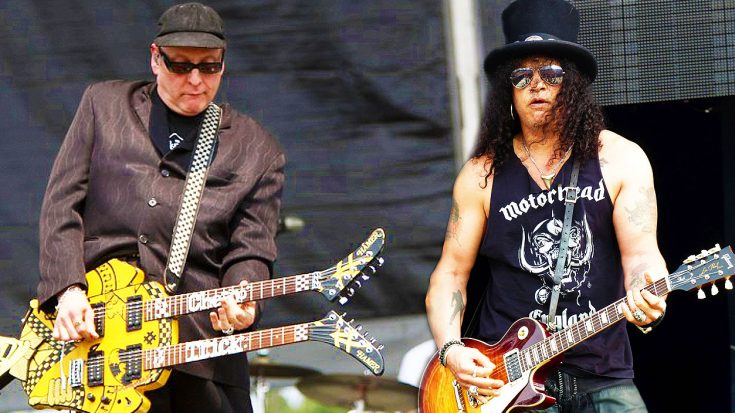 What a night for everyone present at this concert! These concertgoers thought that they were in for an evening with just Guns N’ Roses lead guitarist Slash, who was performing his solo material. Well, they were wrong, and got the surprise of a lifetime. Slash invited legendary guitarist, and member of Cheap Trick, Rick Nielsen up on the stage to perform an amazing duet of Cheap Trick’s cover/hit “Ain’t That A Shame.”

Fun Fact: Cheap Trick’s 1978 cover of this song went to #35 in the US and helped make their At Budokan album a huge hit. A portion of the first guitar solo in their version, played by Rick Nielsen, is lifted from the opening harmonica riff from the Beatles’ “Please Please Me.” That same riff is also used in the guitar outro to the track “The House is Rockin’ (Domestic Problems)” from the band’s 1980 album Dream Police. According to Nielsen, Cheap Trick got the idea to record the song after hearing John Lennon’s 1975 cover version.

The concert took place in Chicago, Illinois, the place where Cheap Trick originated. Slash and Nielsen absolutley shredded this classic gem, that was actually a cover by Cheap Trick. The original song was performed by Fats Domino back in 1955, and Cheap Trick brought it back to life! Enjoy this rendition down below, which features Slash and Nielsen killin’ it with dueling solos, great riffs, and of course some creative pick tosses into the crowd from Nielsen himself.

Watch the awesome cover for yourself down below!