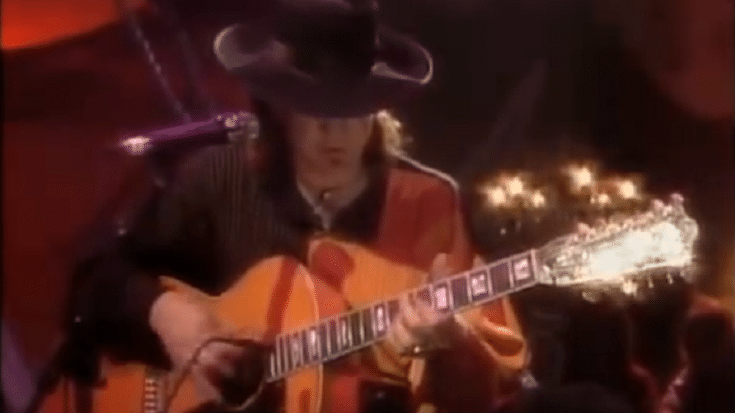 Seeing Stevie Ray Vaughan on MTV Unplugged using a 12-string acoustic guitar to play “Testify” is all kinds of awesome! Like most of his other live performances, this is best heard LOUD. And I mean, really loud. It was originally an uptempo and funky rhythm and blues track but SRV shows he can play it in acoustic and make it sound just as good.

The idea of Stevie Ray Vaughan covering a funky song by the great R&B band the Isley Brothers might seem bizarre until you consider that rhythm and blues was a big part of the Double Trouble playbook. Besides, his choice of “Testify” makes perfect sense when you realize the guitarist on the Isleys’ original 1964 version was none other than his hero, Jimi Hendrix.

SRV may have used the original opening riff by Jimi Hendrix but he gave it a much more electrifying feel especially by having a total of seven guitar solos. It’s intense and keeps you at the edge of your seat. But this Unplugged version showcases his musical brilliance just the same. Each note seems to be more powerful than the last and the speed is insane! He’s not just another blues guitarist — he’s one of the best!