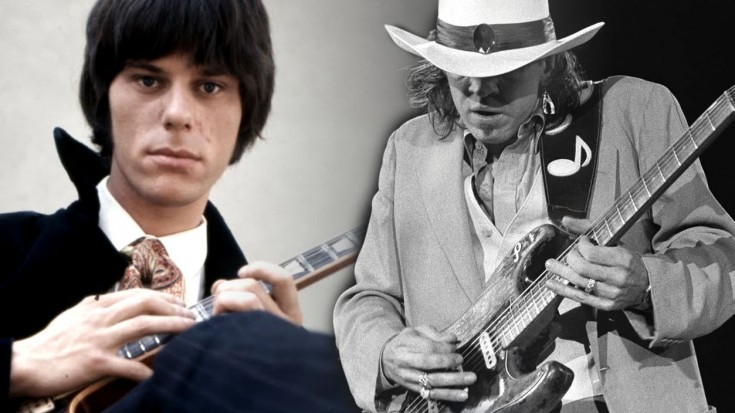 Stevie and Jeff: Live At the UCP Arena!

Wow. That’s all I can really say about the combination of Stevie Ray Vaughan and Jeff Beck onstage together! Two guitar legends trading licks at the UCP Arena shortly before Stevie’s death, and Stevie is matching Jeff note for note!

The boys are seen here playing ‘Going Down’, a blues tune covered by Jeff Beck. While the two are clearly great friends, what begins as two good friends trading licks turns into an old fashioned shootout with guitars and it’s unbelievably fun to watch!

Named The Fire Meets The Fury, this was Stevie Ray Vaughan and Jeff Beck’s first and only tour together.

The good-hearted, bluesy guitar duel that was ‘Going Down’ was all in good fun. Offstage, there wasn’t a guitarist alive that Jeff Beck respected more than his friend Stevie:

“He was well-loved. Stevie’s the American apple pie blues guitarist par excellence. He’s American and a southern boy; he had all the credentials to be top of the heap, and he was.”

What an amazing pair these two made; they were thick as thieves! Jeff is an extraordinary guitar player in his own right, but Stevie was truly in a league of his own.