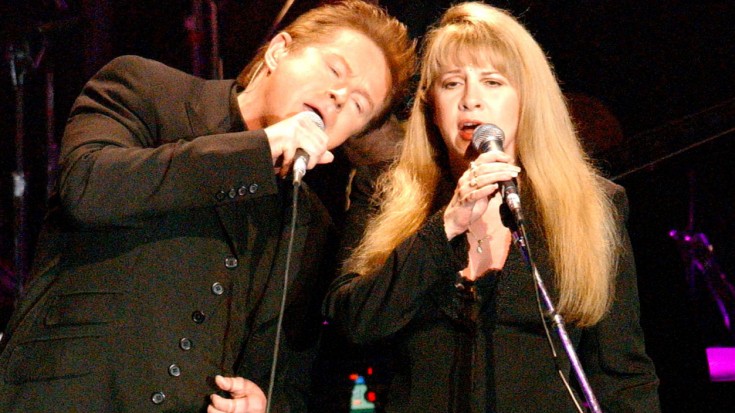 “Her Mind Is Tiffany Twisted…”

Written in 1976 and featured on the Eagles’ 1977 album Hotel California, “Hotel California” goes down in rock history as one of the most loved rock songs ever. Between its winding rhythms that remind you of cruising down a highway at sunset, windows down and wind in your hair and the two guitar attack from Don Felder and Joe Walsh, whose tandem solo makes us wish we’d written it every time we hear it, “Hotel California” is about as perfect as a song gets – or so we thought! In 2005, this Eagles classic became something larger than life when performed by former Eagle Don Henley as he opened for friend and ex-lover Stevie Nicks on her Two Voices Tour and was actually joined by Stevie herself for the second verse and beyond!

Fun Fact: Joe Walsh and Don Felder initially wanted to improvise the solo, but Don Henley convinced them to stick to the original demo brought forth by Felder.

At around 1:30, you hear the crowd go absolutely wild as the Fleetwood Mac singer enters the stage and takes her spot next to Don, and from the moment she breathes “Her mind is Tiffany twisted/She’s got the Mercedes-Benz,” it’s all over – chills abound as rock and roll’s fairy godmother brings an element of magic to “Hotel California” that we never knew we needed and now that we’ve heard it, we’re absolutely dying to hear this made into an actual studio collaboration between the two. If you missed this magical moment the first time around, never fear – you can check out their take on the classic in the audio below!